Signs of Survival: A Memoir of the Holocaust (Hardcover) 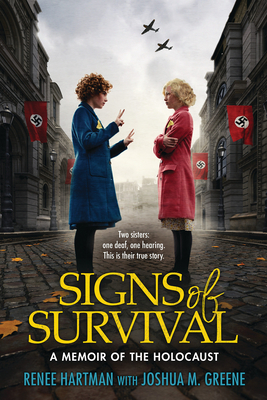 Signs of Survival: A Memoir of the Holocaust (Hardcover)

RENEE: I was ten years old then, and my sister was eight. The responsibility was on me to warn everyone when the soldiers were coming because my sister and both my parents were deaf.

I was my family's ears.

Meet Renee and Herta, two sisters who faced the unimaginable -- together. This is their true story.

As Jews living in 1940s Czechoslovakia, Renee, Herta, and their parents were in immediate danger when the Holocaust came to their door. As the only hearing person in her family, Renee had to alert her parents and sister whenever the sound of Nazi boots approached their home so they could hide.

But soon their parents were tragically taken away, and the two sisters went on the run, desperate to find a safe place to hide. Eventually they, too, would be captured and taken to the concentration camp Bergen-Belsen. Communicating in sign language and relying on each other for strength in the midst of illness, death, and starvation, Renee and Herta would have to fight to survive the darkest of times.

This gripping memoir, told in a vivid "oral history" format, is a testament to the power of sisterhood and love, and now more than ever a reminder of how important it is to honor the past, and keep telling our own stories.

Renee Hartman was born in Bratislava, which is now the capital of Slovakia. She and her sister were arrested by the Nazis and imprisoned in Bergen-Belsen, where they endured horrifying conditions, and where Renee nearly succumbed to typhus. After being liberated, Renee and her sister immigrated to the United States. Ever since, Renee has been writing about her experiences in the Holocaust. She lives in Connecticut.
Joshua M. Greene produces books and films about the Holocaust. His documentaries have been broadcast in twenty countries and his books translated into eight languages. He has taught Holocaust history for Fordham and Hofstra Universities. He lives in Old Westbury, New York.

Praise for Signs of Survival:

"Narrated in a matter-of-fact tone...The story is rich in the depiction of the sisters’ strong sustaining relationship throughout their horrific ordeals." -- Publishers Weekly

"Difficult to read at times, this touching narrative is a poignant addition to the World War II Holocaust canon." -- School Library Journal

"An extraordinary tale of sisterhood and survival, told with simplicity." -- Kirkus Reviews