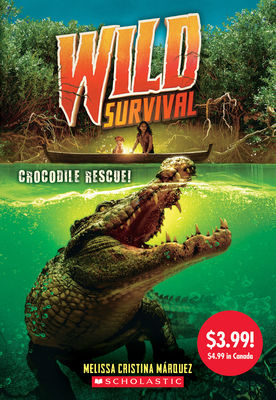 
Special Order—Subject to Availability
Based on a true story, Wild Survival is the story of a girl finding her voice . . . and fighting for survival.

Get ready for summer reading with a special edition of Wild Survival #1: Crocodile Rescue!

Twelve-year-old Adrianna Villalobos and her older brother Feye travel the globe with their parents, the hosts of a suspenseful nature show called "Wild Survival!" The show features daring animal rescues and the work the family does at their animal sanctuary.

They've recently gotten an offer to take the show from YouTube to a TV network, and Adrianna is thrilled. So far, she's always been behind the scenes, but now she gets to join the rest of her family onscreen. She can't wait to bring her passion for animals to a wide audience.

Their first stop is the lush mangrove forests of Cuba, where they're going to help rescue an injured crocodile. But things get off to a rocky start when Feye is injured in an accident partially caused by Adrianna. The status of the show is in jeopardy, and Adrianna's parents want her back behind the scenes, or maybe even back at home.

Adrianna is determined to prove herself, and save the show-whatever it takes. Even if that means confronting the legendary Mega Croc of Cuba that's rumored to inhabit the murky waters around their base camp.

Based on the author's real-life wildlife encounters, this middle-grade series includes real animal facts, illustrations of the creatures mentioned in each book, and an Author's Note from Melissa.

Melissa Cristina Mrquez is a fiercely proud Hispanic marine biologist, wildlife educator, professional speaker and presenter, and freelance environmental contributor. Recently, Melissa was featured on Shark Week 2019, named one of BBC’s 100 Influential and Inspirational Women of 2018, and gave a TEDx talk on sharks and female scientists. Melissa is the founder of The Fins United Initiative (TFUI) — a program that highlights diverse sharks, the threats they face, and the scientists who study them.Melissa holds a BA in Marine Ecology and Conservation from New College of Florida and an MSc in Marine Biology from Victoria University. Born in Puerto Rico and raised in Mexico, Melissa aims to bring attention to the importance of diversity and inclusion with her writing.