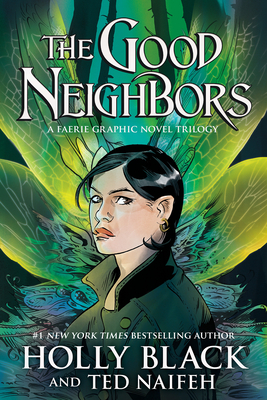 
Not Yet Published—Pre-Order Now
From the bestselling author of The Cruel Prince, an astonishing graphic trilogy set in a faerie world, full of mystery, intrigue, and romance.

From the amazing imagination of bestselling author Holly Black and acclaimed illustrator Ted Naifeh, a mysterious and wonderful faerie saga, for the first time in one volume.

Rue Silver's mother has disappeared... and her father has been arrested, suspected of killing her. But it's not as straightforward as that. Because Rue is a faerie, like her mother was. And her father didn't kill her mother -- instead, he broke a promise to Rue's faerie king grandfather, which caused Rue's mother to be flung back to the faerie world. Now Rue must go to save her -- and defeat a dark faerie that threatens our very mortal world.

Ted Naifeh is the author and illustrator of many acclaimed graphic novels, including Polly and the Pirates, Courtney Crumrin and the Night Things, and Courtney Crumrin Tales: Portrait of the Warlock as a Young Man. He has also illustrated the popular Death Jr. and Gloomcookie series.
Holly Black is the #1 New York Times bestselling author of The Spiderwick Chronicles (with Tony DiTerlizzi) and the Newbery Honor-winning novel Doll Bones. Her other books include The Good Neighbors graphic novels, and the novels The Darkest Part of the Forest, Tithe, Valiant, and Ironside. With Cassandra Clare she is the author of the Magisterium series, a New York Times bestseller. She currently lives in the realm of Western Massachusetts.

Praise for The Good Neighbors:

"Black does a wonderful job of weaving an alien faerie world through Rue's urban landscape, and Naifeh's art, rich with shadows, is expressive and angular and pulls the reader into the story." -- Booklist

"Searing and exceptionally well-written." -- The Bulletin of the Center for Children's Books

"[Black] skillfully blends the mystical elements with a murder mystery, family drama, and a bit of ever-popular teen angst. Black also does not shy away from the darker aspects of faerie legend, which gives the story a nicely unsettling aspect at all times." -- www.BrokenFrontier.com

"Ted's knack for misfit characters with a dose of humor is a perfect fit with Holly's vision of the faerie world. And I don't throw words like 'perfect' around lightly." -- www.The-Trades.com