Words, Space, and the Audience: The Theatrical Tension Between Empiricism and Rationalism (Paperback) 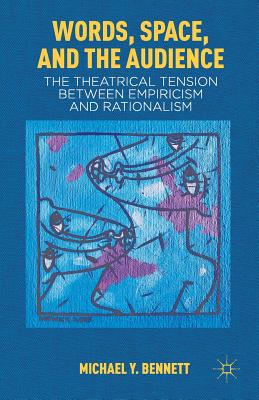 Words, Space, and the Audience: The Theatrical Tension Between Empiricism and Rationalism (Paperback)


Not On Our Shelves—Ships in 1-5 Days
In this unique study, Michael Y. Bennett re-reads four influential modern plays alongside their contemporary debates between rationalism and empiricism to show how these monumental achievements were thoroughly a product of their time, but also universal in their epistemological quest to understand the world through a rational and/or empirical model. Bennett contends that these plays directly engage in their contemporary epistemological debates rather than through the lens of a specific philosophy. Besides producing new, insightful readings of heavily-studied plays, the interdisciplinary (historical, philosophical, dramatic, theatrical, and literary) frame Bennett constructs allows him to investigate one of the most fundamental questions of the theatre - how does meaning get made? Bennett suggests that the key to unlocking theatrical meaning is exploring the tension between empirical and rational modes of understanding. The book concludes with an interview with performance artist Coco Fusco.
Michael Y. Bennett is Associate Professor of English and affiliated faculty in Philosophy at the University of Wisconsin-Whitewater, USA, where he teaches courses on modern drama. He is the author of: Reassessing the Theatre of the Absurd (2011/2013); Words, Space, and the Audience (2012); Narrating the Past through Theatre (2012). He is the editor of Refiguring Oscar Wilde s Salome (2011) and the co-editor of Eugene O'Neill's One-Act Plays (2012). He is also Editor of The Edward Albee Review.