Kant's Rational Religion and the Radical Enlightenment: From Spinoza to Contemporary Debates (Hardcover) 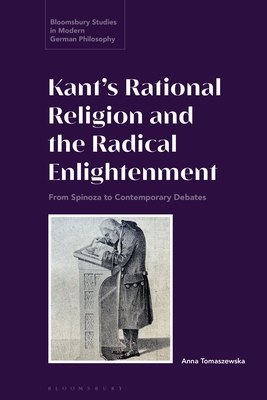 Kant's Rational Religion and the Radical Enlightenment: From Spinoza to Contemporary Debates (Hardcover)

Kant's defence of religion and attempts to reconcile faith with reason position him as a moderate Enlightenment thinker in existing scholarship. Challenging this view and reconceptualising Kant's religion along rationalist lines, Anna Tomaszewska sheds light on its affinities with the ideas of the radical Enlightenment, originating in the work of Baruch Spinoza and understood as a critique of divine revelation.

Distinguishing the epistemological, ethical and political aspects of such a critique, Tomaszewska shows how Kant's defence of religion consists of rationalizing its core tenets and establishing morality as the essence of religious faith. She aligns him with other early modern rationalists and German Spinozists and reveals the significance for contemporary political philosophy. Providing reasons for prioritizing freedom of thought, and hence religious criticism, over an unqualified freedom of belief, Kant's theology approximates the secularising tendency of the radical Enlightenment. Here is an understanding of how the shift towards a secular outlook in Western culture was shaped by attempts to rationalize rather than uproot Christianity.
Anna Tomaszewska is Assistant Professor in the Department of History of Philosophy at the Institute of Philosophy, Jagiellonian University, Poland.