Gay and Lesbian Activism in the Republic of Ireland, 1973-93 (Hardcover) 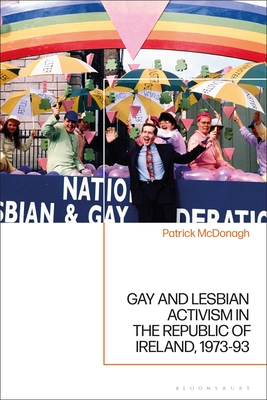 Gay and Lesbian Activism in the Republic of Ireland, 1973-93 (Hardcover)

This thematically-arranged study traces the emergence of visible gay and lesbian communities across the Republic of Ireland and their impact on public perceptions of homosexuality. Along the way it explores the critical and hidden activism of lesbian women, the role of rural provincial activists, the importance of interactions with international gay and lesbian organisations and the extent to which HIV and AIDS impacted the gay rights campaign.

Gay and Lesbian Activism in the Republic of Ireland, 1973-93 focuses in particular on activists' efforts to engage with the different religious organisations in Ireland, the Trade Union movement, Irish political parties and the media, and how these efforts in turn shaped the strategies and activities of gay and lesbian organisations. McDonagh argues that gay and lesbian activists mounted an effective campaign to improve both the legal and social climate for Ireland's gay and lesbian citizens. In doing so, gay and lesbian individuals were important agents of social and political change in the Republic of Ireland in the period from the 1970s to the early 1990s, particularly in relation to Irish sexual mores. The book also helps to contextualise the changes in perceptions of homosexuality that have taken place in recent years and encourages scholars of Irish history to further explore the contribution of Ireland's LGBTQ+ community in transforming Irish society in the 20th and 21st centuries.

Patrick McDonagh is an independent scholar who obtained his PhD in history from the European University Institute in Florence, Italy. He has had articles published in the Journal of the History of Sexuality and the Journal of Irish Economic and Social History. He has also contributed chapters to two recent academic books: From Sodomy Laws to Same-Sex Marriage: International Perspectives since 1789 [eds. Sean Brady and Mark Seymour] (Bloomsbury, 2019) and Queer Youth Histories [ed. Daniel Marshall] (2021).