The Art of Political Storytelling: Why Stories Win Votes in Post-Truth Politics (Paperback) 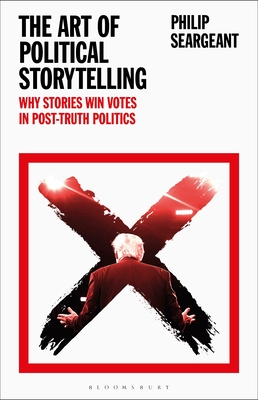 The Art of Political Storytelling: Why Stories Win Votes in Post-Truth Politics (Paperback)

Now in paperback and with a new Afterword offering insights into the events of 2020 and early 2021, including the pandemic, global protests, racial justice debates and the US presidential election, this book provides an original and compelling way of understanding the chaotic world of today's politics. In our post-truth world, tapping into people's emotions has proved far more effective than rational argument - and, as Seargeant argues, the most powerful tool for manipulating emotions is a gripping narrative.

From Trump's America to Brexit Britain, weaving a good story, featuring fearless protagonists, challenging quests against seemingly insurmountable odds, and soundbite after soundbite of memorable dialogue has been at the heart of political success. So does an understanding of the art of storytelling help explain today's successful political movements? Can it translate into a blueprint for victory at the ballot box? The Art of Political Storytelling looks at how stories are created, shared and contested, illuminating the pivotal role that persuasive storytelling plays in shaping our understanding of the political world we live in. By mastering the tools and tricks of narrative, and evaluating the language and rhetorical strategies used to craft and enact them, Seargeant explains how and why today's combination of new media, populism and partisanship makes storytelling an ever more important part of the persuasive and political process.
Philip Seargeant is an author and academic specialising in the study of language and communication. He teaches at the Open University, UK, where his research focuses on the relationships between language, politics and social media. He is the author of several award-winning educational films, and frequently works as a consultant for the BBC and other media outlets. His writing has appeared in publications such as The New European, Prospect, The Huffington Post and Wired.