The Fascism of Ambiguity: A Conceptual Essay (Political Theory and Contemporary Philosophy) (Hardcover) 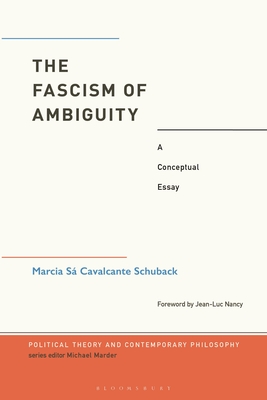 The Fascism of Ambiguity: A Conceptual Essay (Political Theory and Contemporary Philosophy) (Hardcover)


Not On Our Shelves—Ships in 1-5 Days
This book contributes to the work of elucidating the new forms of fascism and authoritarianism that arise today in intimate relation with new mediatic and information technologies. It presents elements of the connection between capitalism and fascism and makes clear how fascism today uses the ambiguity of senses and meanings as its most efficient way of infiltrating our reality and thereby becoming unequivocal.

The fascism of ambiguity is a fascism that grows the more the ambiguities and paradoxical dimensions of the contemporary situation become explicit. It departs from some lessons of history regarding both historical fascism and some of the main critical lines and thoughts produced in the beginning of the 20th Century. It shows what is new in today's form of fascism, discussing its connection to techno-mediatic capitalism, to the dynamics of emptying meanings and senses through a technique of rendering them ambiguous and exacerbated. It outlines some guiding thoughts regarding the question of ambiguity and metapolitics today and concludes by proposing two exercises of precision, through the lenses of poetry and music, as a way to resist and counter-act the fascist metapolitics of the ambiguity of meanings and senses.