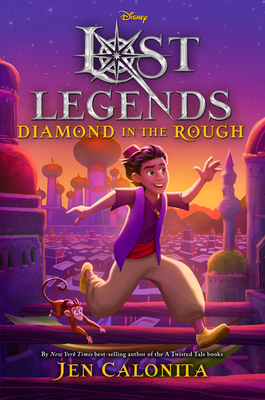 
Not On Our Shelves—Ships in 1-5 Days
The second book in a new middle grade series that features the adventures of Disney’s most lovable roguish heroes as kids!

Before he defeated Jafar…Aladdin was just a poor boy in streets of Agrabah. “Do you trust me?”

Twelve-year-old Aladdin has spent his entire life roaming the desert as a part of a tribe of nomads. He has nothing to his name except the stars in the sky, the clothes on his back, and a peculiar necklace left to him by his late mother. But that doesn’t bother Aladdin—he doesn’t want much. If he had three wishes, he would only ask for one thing: a home. A place to belong.

When Aladdin is separated from his tribe in Agrabah, he feels drawn to the city’s bustling streets. This is a place of possibilities, one that Aladdin might even be able to call his own. Facing a whole new world with magic lurking around every corner, Aladdin soon joins a group of “collectors” who teach him what it means to be a street rat. Aladdin will need to put those skills and his good heart to the test when whispers of a mysterious “diamond” catch up with him and threaten to destroy his new home.

Jen Calonita is the author of the award-winning Secrets of My Hollywood Life and Fairy Tale Reform School series. She lives in New York with her husband, two boys, and two chihuahuas named Captain Jack Sparrow and Ben Kenobi. A huge Disney fan, Jen dreams of moving the whole family into Cinderella's castle at Walt Disney World. Visit her online at: www.jencalonitaonline.com and Twitter @jencalonita.
"[A] briskly paced, suspenseful, action- and magic-filled adventure.... If not a carpet ride, an entertaining journey readers will appreciate."—Kirkus