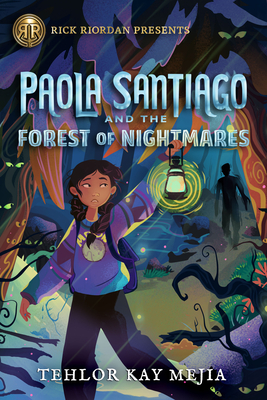 "Paola is a brilliant, furious girl who often trusts her brain but trips over her heart."--Sarah Gailey, Hugo and Locus award-winning author of River of Teeth

Six months after Paola Santiago confronted the legendary La Llorona, life is nothing like she'd expected it to be. She is barely speaking to her best friends, Dante and Emma, and what's worse, her mom has a totally annoying boyfriend. Even with her chupacabra puppy, Bruto, around, Pao can't escape the feeling that she's all alone in the world.

Pao has no one to tell that she's having nightmares again, this time set in a terrifying forest. Even more troubling? At their center is her estranged father, an enigma of a man she barely remembers. And when Dante's abuela falls mysteriously ill, it seems that the dad Pao never knew just might be the key to healing the eccentric old woman.

Pao's search for her father will send her far from home, where she will encounter new monsters and ghosts, a devastating betrayal, and finally, the forest of her nightmares. Will the truths her father has been hiding save the people Pao loves, or destroy them?

Once again Tehlor Kay Mejia draws on her Mexican heritage to tell a wild and wondrous story that combines creatures from folklore with modern-day challenges.


Endorsed by Rick Riordan, author of Percy Jackson and the Olympians, soon to be a series on Disney+.

Complete your middle grade collection with these best-selling fan favorites:

Tehlor Kay Mejia is an Oregon native in love with the alpine meadows and evergreen forests of her home state, where she lives with her daughter. She is the author of three middle grade titles about Paola Santiago: Paola Santiago and the River of Tears, Paola Santiago and the Forest of Nightmares, and Paola Santiago and the Sanctuary of Shadows. Her short fiction appears in the All Out and Toil & Trouble anthologies from Harlequin Teen and The Cursed Carnival and Other Calamities from Rick Riordan Presents. She has also written two highly acclaimed YA novels, We Set the Dark on Fire and We Unleash the Merciless Storm. When she's not writing, you can find her plucking at her guitar, stealing rosemary sprigs from overgrown gardens, or trying to make the perfect vegan tamale. Follow her on Instagram @tehlorkay.
"Paola Santiago and the River of Tears is just plain marvelous. Paola is a brilliant, furious girl who often trusts her brain but trips over her heart. This book is a thrilling adventure from start to finish, with a bright core of emotional honesty anchoring it to reality."—Sarah Gailey, Hugo and Locus Award-winning author of River of Teeth

"Mejia pulls no punches in showing us the monsters--whether fantastic or all too real--that children who live on the border between two cultures face every day. Even better, she gives readers the tremendous gift of a third way, one that shows us science and folklore aren't enemies, but rather allies, and that reason and myth are strongest when they work together."—Carlos Hernandez, award-winning author of Sal and Gabi Fix the Universe

"Paola Santiago and the River of Tears has the perfect blend of action, heart, and honesty in showing a painful world that most readers will already recognize--and proving the perfect amount of hope that they will survive and thrive. Tehlor Kay Mejia's writing is pure magic."—Karen Callender, Stonewall Book Award-winning author of Hurricane Child

"Paola Santiago is a whip-smart Latina who dares to explore the shadows between folklore and middle-school friendship. A thrilling adventure full of culture, magic, monsters, and a mystical chancla, Mejia offers readers a fresh, modern take on La Llorona while creating a legend of the intrepid Paola."—Nina Moreno, author of DON'T DATE ROSA SANTOS

*"Mejia draws upon her Latinx heritage to conjure creatures from folklore . . . and layer[s] in realistic plot points: socioeconomic and immigration concerns, the tension between science and superstition."—Publishers Weekly (starred review)

*"This fast-paced journey into Latinx folklore, with its clever protagonist, is sure to keep readers turning pages into the night."—Booklist (starred review)