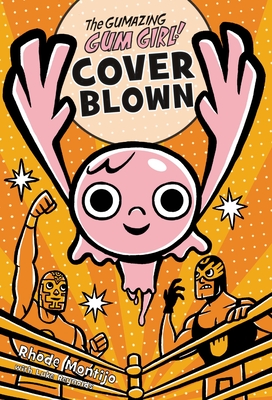 This is book number 4 in the The Gumazing Gum Girl! series.

When Gabby Gomez (aka Gum Girl) heads to Mexico on a family vacation, little does she know what (and who) is about to POP up!
First, the famous luchador and archaeologist Sol Azteca invites Gabby to his wrestling camp inside an ancient Maya pyramid. There, Gabby uncovers secrets about her heritage AND the origins of her gumazing superpower!
But trouble starts to bubble up when the infamous Underhander jumps on the scene to steal the powerful Jade Jaguar. Can Gum Girl bounce to the rescue? Or will Gabby Gomez have to save the day on her own?!
Rhode Montijo (rhodemontijo.com) received a BFA in illustration from California College of Arts and Crafts (now California College of the Arts), and soon after published Pablo's Inferno, a five-issue indie comic series. His first book for children, Cloud Boy, was published in 2006 and was followed by The Halloween Kid. He also illustrated Greg Trine's Melvin Beederman, Superhero series, Vicky Rubin's The Three Swingin' Pigs, Gary Soto's Lucky Luis, and has worked with Mondo Media on several online series. Chews Your Destiny is his first chapter book in the Gum Girl series, followed by Gum Luck.