We Weren't Looking to Be Found (Hardcover) 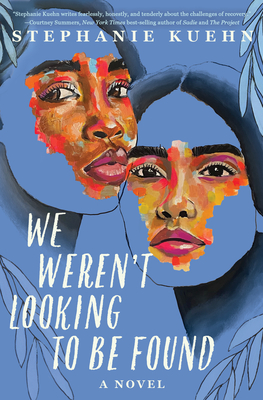 We Weren't Looking to Be Found (Hardcover)


Not On Our Shelves—Ships in 1-5 Days
"Stephanie Kuehn writes fearlessly, honestly, and tenderly about the challenges of recovery"—Courtney Summers, New York Times best-selling author of Sadie and The Project


Dani comes from the richest, most famous Black family in Texas and has everything a girl could want. So why does she keep using drugs and engaging in other self-destructive behavior?

Camila’s Colombian American family doesn’t have much, but she knows exactly what she wants out of life and works her ass off to get it. So why does she keep failing, and why does she self-harm every time she does?

When Dani and Camila find themselves rooming together at Peach Tree Hills, a treatment facility in beautiful rural Georgia, they initially think they’ll never get along—and they’ll never get better. But then they find a mysterious music box filled with letters from a former resident of PTH, and together they set out to solve the mystery of who this girl was . . . and who she’s become. The investigation will bring them closer, and what they find at the end might just bring them hope.

Stephanie Kuehn is a psychologist and an author. She has written five novels for teens, including Charm & Strange, which won the ALA's 2014 William C. Morris Award for best debut young adult novel. Stephanie lives in the San Francisco Bay Area with her family and their many pets, where life is loud, joyous, and filled with animal hair.
"A compelling and thoughtful exploration of mental health by way of an unexpected--and beautiful--friendship forged during the darkest of times. Stephanie Kuehn writes fearlessly, honestly, and tenderly about the challenges of recovery and We Weren't Looking to Be Found is a hopeful, affecting, and important book."—Courtney Summers, New York Times best-selling author of Sadie and The Project

"Both teens narrate in the first person, giving an intimacy and immediacy to their struggles with depression and addiction that feel authentic. This may be triggering for some teens but a lifesaver for others, as the bittersweet ending is hopeful while acknowledging that recovery is rarely straightforward."—Booklist

"We Weren't Looking to Be Found tells a story of mental health and girlhood with tenderness, nuance, and above all, raw honesty. Nobody hurts, heals, and surprises like Stephanie Kuehn."—Dahlia Adler, author of Cool for the Summer