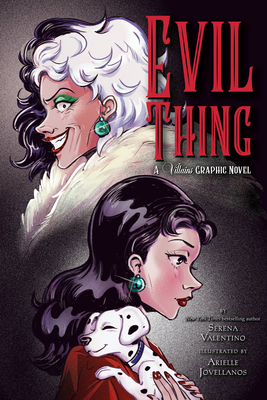 “Sure, you know the story of those wretched Dalmatians. But don’t I deserve a chance to tell my own side of the story? It is fabulous, after all.”

You may think you know the tale: a happy young couple, one hundred and one Dalmatians, and the woman determined to turn them into a perfectly spotted fur coat.
But who is that monster, that scene-stealer, that evil thing? Who is the woman behind it all? Before the car crash, before the dognapping, before furs became her only true love, there was another story. This is the story of Cruella De Vil—in her own words.
Even the cruelest villains have best friends, true loves, and daring dreams. After all, nothing is as simple as black and white.
In this first graphic novel adaptation of the New York Times best-selling Villains series, Arielle Jovellanos brings Serena Valentino’s darkly captivating world to life with beautiful and haunting illustrations in a stunning new visual format.

Serena Valentino has been weaving tales that combine mythos and guile for the past decade. She has earned critical acclaim in both the comic and horror domains, where she is known for her unique style of storytelling, bringing her readers into exquisitely frightening worlds filled with terror, beauty, and extraordinary protagonists. The books in her best-selling Villains series are best enjoyed when read in the following order: Fairest of All, The Beast Within, Poor Unfortunate Soul, Mistress of All Evil, Mother Knows Best, Odd Sisters,and Evil Thing.

Arielle Jovellanos is a New York based freelance illustrator, writer, and comic artist. Other recent works include writing for the Aggretsuko comic series and illustration for the sci-fi graphic novel Black Star. Outside of work, she loves sitcoms, showtunes, superheroes, succulents, sartorialism, and storytelling structure. (Also alliteration, apparently.)
Valentino does a solid job of establishing the cast of characters, and fans of the animated film will enjoy connecting the threads. While there are moments of softness that evoke readers’ empathy, Cruella unapologetically wields her power to behave cruelly. . . Jovellanos’ art deftly captures a range of emotions, specifically in showing how Cruella’s face is transformed in response to her whims. . . Entertaining for fans of villain backstories and Disney classics alike.