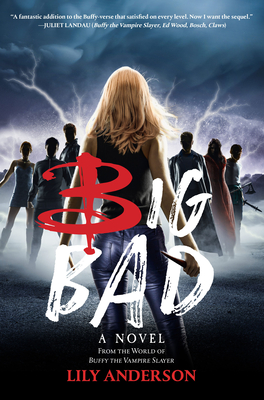 
Not On Our Shelves—Ships in 1-5 Days
Buffy the Vampire Slayer meets Suicide Squad in this adult dark, rompy novel in which the most beloved villains from Buffy must team up to stop the Slayer from ending their evil universe!
Demondale, Callifornia, 1999...Like Sunnydale, but whole lot more evil.

Step into this alternate reality, where chaos reigns supreme. The Mayor’s sun-shade has created permanent darkness over Sunnydale, fully opening the Hellmouth once and for all. Now the newly christened Demondale has become a safe haven for vampires, beasts, and all types of ruffians. It's never been better to be bad.

Aspiring supervillains (and super nerds) Jonathan and Andrew attempt to hold their own in a town full of monsters, while eleven-hundred-year-old vengeance demon Anya is just looking for something to give her life purpose again, spending her days working at an evil juice bar. But soon word gets out that there’s a new Big Bad on the scene, one more powerful and more destructive than anyone who has come before. She, of course, is Buffy the Vampire Slayer. And she’s hell-bent on rooting out all of this reality's evil by any means necessary.

Now Jonathan, Andrew, and Anya must recruit a team of Demondale’s most notorious villains—including Angelus, Spike, Drusilla, and even Ripper the malevolent magic shop owner—in order to save their world. But it’ll be no easy feat to put their pride and differences aside and stop the worst thing that has ever come to town: good.

Written by acclaimed author and Buffy super fan Lily Anderson, this novel brings together Buffy's most devious and beloved villains from the Trio to the Whirlwind to Anya, Glory, and Vampire Willow. This is one apocalypse Buffy fans are not going to want to miss!
Lily Anderson is the author of The Throwback List;The Only Thing Worse Than Me is You;Not Now, Not Ever; and Undead Girl Gang. A former school librarian, she is deeply devoted to Shakespeare, fairy tales, and podcasts. Somewhere in Northern California, she is having strong opinions on musical theater. Find her online at mslilyanderson.com.
“Big Bad is a fantastic addition to the Buffy-verse. I was so taken with Lily Anderson’s writing, that I finished the book in two days! It was a joy to go on the journey into Demondale. She really captured each character’s voice (no easy feat with Drusilla) and the heart of what makes this universe so special. I loved Dru’s band, Drusilla and the Dollies. I wish I’d gotten the chance to sing at Tthe Bronze on the show! I was engrossed! Lily gave the reader a gratifying ending, without it feeling forced or manufactured. The book satisfied on every level. Now I want the sequel.”—Juliet Landau (Buffy the Vampire Slayer, Angel, Ed Wood, Bosch, Claws, A Place Among the Dead)