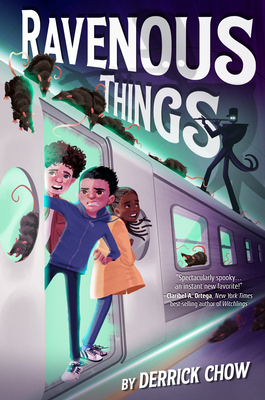 Climb aboard the midnight train! Things wondrous and terrible await you...

Twelve-year-old Reggie Wong has a quick temper that’s always getting him into trouble at school, while at home his mom struggles to get out of bed--let alone leave their apartment. That’s why Reggie desperately needs his dad back. One problem: His dad is dead.

Enter the Conductor, a peculiar man who promises to make Reggie’s wish to see his father just one more time come true. All he must do is climb aboard the man’s subway train, which leaves St. Patrick Station promptly at midnight. Desperate to have his dad and happy family back, Reggie takes him up on the offer, only to discover the train is filled with other children who have lost a loved one, just like him. As he speeds through the wild, uncharted tunnels beneath the city, Reggie meets Chantal, an annoyingly peppy girl obsessed with lists and psychiatry, and Gareth, his arch-nemesis and bully since the fourth grade. As each kid steps off the train and into the arms of their lost family member, Reggie can’t believe his impossible wish is about to come true.

But when Reggie comes to the end of the line and sees his father waiting for him, he soon discovers all is not as it seems. He and his unlikely new friends have been ensnared in a deadly trap. Together, the three must find a way to foil the Conductor’s diabolical plot and find their way out of the underground subway where horrors worse than they have ever imagined lurk around every corner. The rats of St. Patrick Station have taken over and they’re absolutely ravenous.

In this stunning debut, author Derrick Chow reenvisions the tale of the Pied Piper. Both terrifying and hauntingly beautiful, Chow masterfully uses literal and figurative monsters to explore the themes of grief and how we handle loss.
Derrick Chow is an author, illustrator, and comic creator. His short stories have been featured in several comic anthologies; and his illustrations appear in newspapers, magazines, and books across North America. He lives in Toronto, where he is very active in the local arts scene. This is his first novel.
"Beautifully written and spectacularly spooky, Ravenous Things is an instant new favorite!"—Claribel Ortega, New York Times best-selling author of Witchlings

"Chow draws on the more sinister aspects of the Pied Piper source material to make a true villain in the Conductor, and an increasingly speedy pace maximizes tension. The book moves beyond thrills and chills, however, as it explores loss, focusing on how grief can be both painfully specific and universally shared, for better or for worse."—BCCB

"Equal parts chilling and poignant, Ravenous Things is a true gem of a debut horror novel. Creepy scenes galore blended with beautiful prose makes this haunting exploration of grief and the “monsters” we endure a must-have!"—Lindsay Currie, author Scritch Scratch and The Girl in White

"You could not pry this creepy little book out of my hands it was so good!! I had to finish it in one sitting. Parts of this book actually had me shrieking out loud. Horrifying and beautiful, this is an absolute masterpiece!"—Ellen Oh, author of the Spirit Hunters series