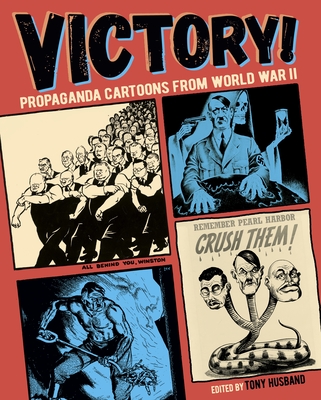 Award-winning cartoonist Tony Husband tells the story of World War II through a selection of the era's finest political cartoons.

Satire is one of the key weapons of war. Forget 'sticks and stones', each country uses cartoons to hit the enemy where it really hurts and to maintain morale on the home front. Each country brought their own unique style and this collection features work from Britain, the USA, Germany, Russia and Japan and features the work of some of World War II's greatest cartoonists including Bill Mauldin, Fougasse, Emett, David Low and Graham Laidler. Illuminating and important, these propaganda cartoons give rich insight into the mood of the time and the ways that emotions were harbored to support the war effort.
Tony Husband is one of the UK's leading cartoonists. He has created cartoons for many leading publications, including The Spectator, Private Eye, The Times and Punch. His Yobs strip (Private Eye) is one of the best-known comic strips in the UK and, at 25 years, one of the longest running. Tony has won more than 15 major awards, including the prestigious Pont Award.