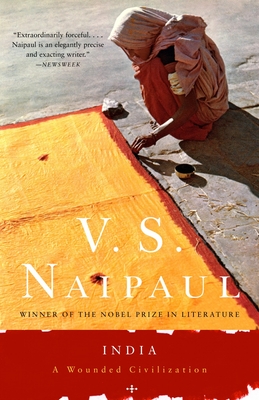 
Not On Our Shelves—Ships in 1-5 Days
In 1975, at the height of Indira Gandhi’s “Emergency,” V. S. Naipaul returned to India, the country his ancestors had left one hundred years earlier. Out of that journey he produced this concise masterpiece: a vibrant, defiantly unsentimental portrait of a society traumatized by centuries of foreign conquest and immured in a mythic vision of its past.

Drawing on novels, news reports, political memoirs, and his own encounters with ordinary Indians–from a supercilious prince to an engineer constructing housing for Bombay’s homeless–Naipaul captures a vast, mysterious, and agonized continent inaccessible to foreigners and barely visible to its own people. He sees both the burgeoning space program and the 5,000 volunteers chanting mantras to purify a defiled temple; the feudal village autocrat and the Naxalite revolutionaries who combined Maoist rhetoric with ritual murder. Relentless in its vision, thrilling in the keenness of its prose, India: A Wounded Civilization is a work of astonishing insight and candor.
V.S. Naipaul was born in Trinidad in 1932. He came to England on a scholarship in 1950. He spent four years at University College, Oxford, and began to write, in London, in 1954. He pursued no other profession.

His novels include A House for Mr Biswas, The Mimic Men, Guerrillas, A Bend in the River, and The Enigma of Arrival. In 1971 he was awarded the Booker Prize for In a Free State. His works of nonfiction, equally acclaimed, include Among the Believers, Beyond Belief, The Masque of Africa, and a trio of books about India: An Area of Darkness, India: A Wounded Civilization and India: A Million Mutinies Now.

In 1990, V.S. Naipaul received a knighthood for services to literature; in 1993, he was the first recipient of the David Cohen British Literature Prize. He received the Nobel Prize in Literature in 2001. He lived with his wife Nadira and cat Augustus in Wiltshire, and died in 2018.
“Extraordinarily forceful. . . . Naipaul is an elegantly precise and exacting writer.” –Newsweek

“Typical Naipaul–brilliantly lucid, terse, with something hardbitten yet resigned in the emotional background.” –The New York Times Book Review