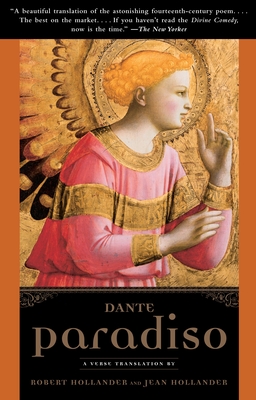 
In Stock—Click for Locations
With his journeys through Hell and Purgatory complete, Dante is at last led by his beloved Beatrice to Paradise. Where his experiences in the Inferno and Purgatorio were arduous and harrowing, this is a journey of comfort, revelation, and, above all, love-both romantic and divine. Robert Hollander is a Dante scholar of unmatched reputation and his wife, Jean, is an accomplished poet. Their verse translation with facing-page Italian combines maximum fidelity to Dante's text with the artistry necessary to reflect the original's virtuosity. They have produced the clearest, most accurate, and most readable translation of the three books of The Divine Comedy, with unsurpassable footnotes and introductions, likely to be a touchstone for generations to come.

Robert Hollander taught Dante’s Divine Comedy to Princeton students for forty-two years, and is the author of a dozen books and more than seventy articles on Dante, Boccaccio, and other Italian authors. He is Professor in European Literature Emeritus at Princeton and the founding director of both the Dartmouth Dante Project and the Princeton Dante Project. He has received many awards, including the gold medal of the city of Florence and the gold florin of the Dante Society of America, in recognition of his work on Dante. Jean Hollander has taught literature and writing at Brooklyn College, Columbia University, Princeton University, and the College of New Jersey, where she was director of the Writers’ Conference for twenty-three years.

“A beautiful translation of the astonishing fourteenth-century poem. . . . The best on the market. . . . If you haven't read the Divine Comedy now is the time.”
—The New Yorker

“Paradiso . . . contains some of the most exhilarating poetry ever written. . . . Robert Hollander is one of the pre-eminent Dante scholars of our time.”
—The New York Times

“For our time and for an incalculable future the Hollander translation of The Divine Comedy will be the one used by serious readers. . . . Splendid as this new translation is, the endlessly valuable notes are what make this edition supplant all others.”
—National Review

“The Hollanders' version is supple and clear, a triumph.”
—The Los Angeles Times

“Very likely the most enduring, both as a literary achievement and for its commentaries.”
—Atlantic Montly