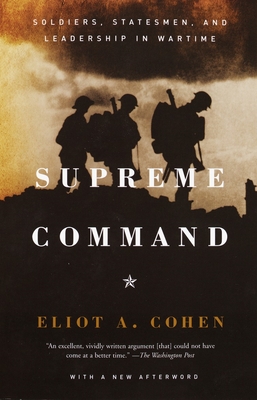 By Eliot A. Cohen


Not On Our Shelves—Ships in 1-5 Days
The orthodoxy regarding the relationship between politicians and military leaders in wartime democracies contends that politicians should declare a military operation's objectives and then step aside and leave the business of war to the military. In this timely and controversial examination of civilian-military relations in wartime democracies, Eliot A. Cohen chips away at this time-honored belief with case studies of statesmen who dared to prod, provoke, and even defy their military officers to great effect.

Using the leadership of Abraham Lincoln, Georges Clemenceau, Winston Churchill, and David Ben-Gurion to build his argument, Cohen offers compelling proof that, as Clemenceau put it, “War is too important to leave to the generals.” By examining the shared leadership traits of four politicians who triumphed in extraordinarily varied military campaigns, Cohen argues that active statesmen make the best wartime leaders, pushing their military subordinates to succeed where they might have failed if left to their own devices. Thought provoking and soundly argued, Cohen's Supreme Command is essential reading not only for military and political players but also for informed citizens and anyone interested in leadership.
Eliot A. Cohen is Professor of Strategic Studies at the Paul H. Nitze School of Advanced International Studies of the Johns Hopkins University. He previously served on the policy planning staff of the Office of the Secretary of Defense and as an intelligence officer in the United States Army Reserve, and taught at the U.S. Naval War College and at Harvard University. He has written books and articles on a variety of military and national security-related subjects. A frequent consultant to the Department of Defense and the intelligence community, he is a member of the Defense Policy Board, advising the Secretary of Defense. He lives in Washington, D.C.

“An excellent, vividly written argument [that] could not have come at a better time. —The Washington Post

“Fascinating.…Mr. Cohen's point is ultimately not a sentimental but a substantive one.…His elucidation of his theory is organized tightly and rendered crisply.”— The New York Times

“Every so often a book appears just at the moment when it is most needed. . . . Such a book is Supreme Command, a superb study of civilian commanders in chief in times of war by the nation's leading scholar of military-civilian relations.”–The Weekly Standard

“Cohen's well-written, absorbing critique of the normal theory is nothing short of crushing. . . . Invaluable.”–The New Leader

“It is well worth devoting some energy to stamping on the myth that soldiers should be allowed to go about their business without pesky politicians getting in the way, and an important contribution to this demolition job has been made by Eliot Cohen.”–The Economist

“Supreme Command will be read as often by the professional military and the civil servants and politicians that employ them as is Samuel Huntington’s The Soldiers and the State and Morris Janowitz’s The Professional Soldier, both of which are true classics.”–The Washington Times

“Intrinsically significant to the study of strategy and important on a practical level.”–Booklist

“Important. . . . Many senior politicians now balk at asking tough questions or challenging military judgments even as they set ambitious goals. But Cohen’s logic remains sound, and it would be a shame if it took a calamity, resulting from a combination of military misjudgment and civilian passivity, before it gets a hearing.”–Foreign Affairs

“Cohen, who writes with concision and insight, robustly argues that, far from being incompetent dunderheads, as commonly portrayed, civilian statesmen can be brilliant commanders. . . . Give[s] us much to ponder.”–Washington Monthly

“Supreme Command is a must read for the highest civilian and military leadership and should also rank high on military professional reading lists.”–Naval War College Review

“Essential reading for anyone concerned with current United States civil-military relations and national strategy. . . . It is cogent in nearly every detail–and we need all the help it can offer.”–The Journal of Military History

“Cohen’s revisionist thesis is especially timely. . . . [He] is surely right that we need to develop different — more traditional — attitudes and protocols concerning the military-civilian partnership.” –Commentary

“No one is better qualified than Cohen to write about political leadership in wartime. . . . This sustained analysis by a perceptive ‘subordinate’ who is also an outstanding historian should become required reading for statesmen and students alike.”–The National Interest