I Have Something to Say: Mastering the Art of Public Speaking in an Age of Disconnection (Hardcover) 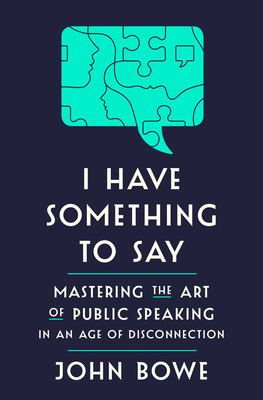 I Have Something to Say: Mastering the Art of Public Speaking in an Age of Disconnection (Hardcover)


Not On Our Shelves—Ships in 1-5 Days
A veteran journalist discovers an ancient system of speech techniques for overcoming the fear of public speaking—and reveals how they can profoundly change our lives.

In 2010, award-winning journalist John Bowe learned that his cousin Bill, a longtime extreme recluse living in his parents’ basement, had, at the age of fifty-nine, overcome a lifetime of shyness and isolation—and gotten happily married. Bill credited his turnaround to Toastmasters, the world's largest organization devoted to teaching the art of public speaking.

Fascinated by the possibility that speech training could foster the kind of psychological well-being more commonly sought through psychiatric treatment, and intrigued by the notion that words can serve as medicine, Bowe set out to discover the origins of speech training—and to learn for himself how to speak better in public.

From the birth of democracy in Ancient Greece until two centuries ago, education meant, in addition to reading and writing, years of learning specific, easily taught language techniques for interacting with others. Nowadays, absent such education, the average American speaks 16,000 to 20,000 words every day, but 74 percent of us suffer from speech anxiety. As he joins Toastmasters and learns, step-by-step, to successfully overcome his own speech anxiety, Bowe muses upon our record levels of loneliness, social isolation, and political divisiveness. What would it mean for Americans to learn once again the simple art of talking to one another?

Bowe shows that learning to speak in public means more than giving a decent speech without nervousness (or a total meltdown). Learning to connect with others bestows upon us an enhanced sense of freedom, power, and belonging.
John Bowe has contributed to The New Yorker, The New York Times Magazine, GQ, McSweeney's, This American Life, and many others. He is the co-editor of Gig: Americans Talk About Their Jobs; editor of Us: Americans Talk About Love, and author of Nobodies: Modern American Slave Labor and the Dark Side of the New Global Economy. He co-wrote the screenplay for the movie Basquiat. He is a recipient of the J. Anthony Lukas Work-in-Progress Award, the Hillman Prize, the Richard J. Margolis Award, and the Harry Chapin Media Award, for reporting on hunger-and poverty-related issues. He was born in Wayzata, Minnesota. He currently lives in New York City.
“It’s hard to imagine a timelier read. Now more than ever, people are hungry for a way to feel connected. Bowe’s ‘discovery,’ ancient before it was new, is that our ability to connect—and our power to change the world—is only as good as our ability to communicate.”—Scott Harrison, founder and CEO of Charity: Water and author of the New York Times bestseller Thirst

“Easily digestible and thought-provoking, this book rescues ‘speech training’ from the realm of business self-help and elevates the subject to the front lines of the problems of our time. Through personal experiences, peppered with knowledge derived over the ages from around the world, Bowe demonstrates that effective communication can be learned by all people and personality types.”—Yasmeen Hassan, global executive director, Equality Now

“This book is about the power of words—and the strength we gain from learning how to use them better. I Have Something to Say shows we don’t suffer from speech anxiety because we’re anxious; we’re anxious because we haven’t learned how to use words to connect with everyone around us.”—Charles Duhigg, author of the New York Times bestsellers The Power of Habit and Smarter Faster Better