A Man for All Markets: From Las Vegas to Wall Street, How I Beat the Dealer and the Market (Hardcover) 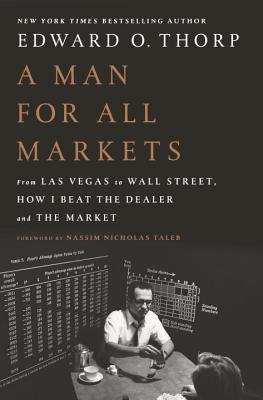 A Man for All Markets: From Las Vegas to Wall Street, How I Beat the Dealer and the Market (Hardcover)


Not On Our Shelves—Ships in 1-5 Days
The incredible true story of the card-counting mathematics professor who taught the world how to beat the dealer and, as the first of the great quantitative investors, ushered in a revolution on Wall Street.

A child of the Great Depression, legendary mathematician Edward O. Thorp invented card counting, proving the seemingly impossible: that you could beat the dealer at the blackjack table. As a result he launched a gambling renaissance. His remarkable success—and mathematically unassailable method—caused such an uproar that casinos altered the rules of the game to thwart him and the legions he inspired. They barred him from their premises, even put his life in jeopardy. Nonetheless, gambling was forever changed.

Thereafter, Thorp shifted his sights to “the biggest casino in the world”: Wall Street. Devising and then deploying mathematical formulas to beat the market, Thorp ushered in the era of quantitative finance we live in today. Along the way, the so-called godfather of the quants played bridge with Warren Buffett, crossed swords with a young Rudy Giuliani, detected the Bernie Madoff scheme, and, to beat the game of roulette, invented, with Claude Shannon, the world’s first wearable computer.

Here, for the first time, Thorp tells the story of what he did, how he did it, his passions and motivations, and the curiosity that has always driven him to disregard conventional wisdom and devise game-changing solutions to seemingly insoluble problems. An intellectual thrill ride, replete with practical wisdom that can guide us all in uncertain financial waters, A Man for All Markets is an instant classic—a book that challenges its readers to think logically about a seemingly irrational world.

Praise for A Man for All Markets

“In A Man for All Markets, [Thorp] delightfully recounts his progress (if that is the word) from college teacher to gambler to hedge-fund manager. Along the way we learn important lessons about the functioning of markets and the logic of investment.”—The Wall Street Journal

“[Thorp] gives a biological summation (think Richard Feynman’s Surely You’re Joking, Mr. Feynman!) of his quest to prove the aphorism ‘the house always wins’ is flawed. . . . Illuminating for the mathematically inclined, and cautionary for would-be gamblers and day traders”—
Library Journal
Edward O. Thorp is the author of the bestseller Beat the Dealer, which transformed the game of blackjack. His subsequent book, Beat the Market, co-authored with Sheen T. Kassouf, influenced securities markets around the globe. Thorp is one of the world’s best blackjack players and investors, and his hedge funds were profitable every year for twenty-nine years. He lives in Newport Beach, California.
“In A Man for All Markets, [Thorp] delightfully recounts his progress (if that is the word) from college teacher to gambler to hedge-fund manager. Along the way we learn important lessons about the functioning of markets and the logic of investment.”—The Wall Street Journal

“So entertaining . . . pretty wonderful . . . Thorp’s manner of thinking and doing . . . is an inspiration in these confused times.”—Bloomberg.com

“[A Man for All Markets is] the kind of thing any would-be investor, to say nothing of casino cowboy, ought to read. Thorp’s in-the-trenches account of gaming the system(s) is a pleasure—and instructive, too.”—Kirkus Reviews

“An amazing book by a true icon . . . Edward O. Thorp launched revolutions in Vegas and on Wall Street by turning math into magic, and here he weaves his own life lessons into a page-turner as hot as a deck full of aces. Loved it!”—Ben Mezrich, New York Times bestselling author of Bringing Down the House and The Accidental Billionaires

“Whether you are an aspiring professional player, a casual gambler, or an occasional visitor to Las Vegas, you can feel the impact of Edward O. Thorp’s intellect on that desert city. In 1962, Thorp published the classic book Beat the Dealer. The text was based on Thorp’s original research that stemmed from his curiosity about the game of 21 and was billed as a how-to book for the layperson to beat the casinos at blackjack. Simply stated, it changed everything. A Man for All Markets chronicles Thorp’s personal journey in navigating the unexpected and sometimes dangerous obstacles that come along with challenging the status quo of a wealthy corporate adversary.”—Nicholas G. Colon, professional advantage gambler and managing director, Alea Consulting Group

“What a CV! Figure out how to win at blackjack using card counting? Check. Build the world’s first wearable computer? Check. Find the formula for valuing financial options but use it to make money rather than win a Nobel Prize? Check. This book is in part the gripping story of how one man’s genius and dedication has solved so many problems in diverse fields. But more important, it’s a fascinating insight into the thought processes of someone with little interest in fame, who has mostly stayed under the radar, yet who has followed his inquisitive mind wherever it has led him, and reaped the resulting rewards. There is nothing more important than knowing how to think clearly. Read this book and learn from a master.”—Paul Wilmott, founder, Wilmott magazine