The Theatre of the Absurd (Paperback) 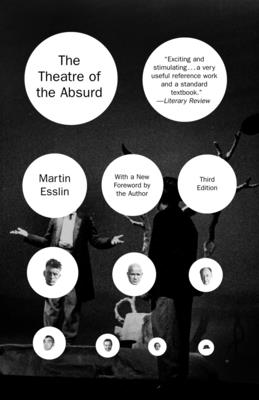 The Theatre of the Absurd (Paperback)


Special Order—Subject to Availability
In 1953, Samuel Beckett’s Waiting for Godot premiered at a tiny avant-garde theatre in Paris; within five years, it had been translated into more than twenty languages and seen by more than a million spectators. Its startling popularity marked the emergence of a new type of theatre whose proponents—Beckett, Ionesco, Genet, Pinter, and others—shattered dramatic conventions and paid scant attention to psychological realism, while highlighting their characters’ inability to understand one another. In 1961, Martin Esslin gave a name to the phenomenon in his groundbreaking study of these playwrights who dramatized the absurdity at the core of the human condition.

Over four decades after its initial publication, Esslin’s landmark book has lost none of its freshness. The questions these dramatists raise about the struggle for meaning in a purposeless world are still as incisive and necessary today as they were when Beckett’s tramps first waited beneath a dying tree on a lonely country road for a mysterious benefactor who would never show. Authoritative, engaging, and eminently readable, The Theatre of the Absurd is nothing short of a classic: vital reading for anyone with an interest in the theatre.
Martin Esslin was born in Budapest and educated in Austria. He read Philosophy and English at Vienna University and graduated as a producer from the Reinhardt Seminar, the well-known dramatic academy. He left Austria in 1938 and in 1940 began working for the BBC as a producer, scriptwriter, and broadcaster. In 1963 he became Head of Radio Drama at the BBC, a position he held until his retirement in 1977. At his death in 2002 at the age of 83 he was Emeritus Professor of Drama at Stanford University.
“Exciting and stimulating...a very useful reference work and a standard text book.” —Literary Review