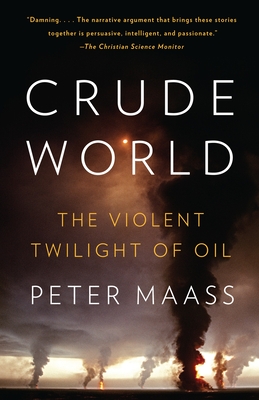 The catastrophic oil spill in the Gulf of Mexico has brought new attention to the huge costs of our oil dependence. In this stunning and revealing book, Peter Maass examines the social, political, and environmental impact of petroleum on the countries that produce it.

Every unhappy oil-producing nation is unhappy in its own way, but all are touched by the “resource curse”—the power of oil to exacerbate existing problems and create new ones. Peter Maass presents a vivid portrait of the troubled world oil has created. From Saudi Arabia to Equatorial Guinea, from Venezuela to Iraq, the stories of rebels, royalty, middlemen, environmentalists, indigenous activists, and CEOs—all deftly and sensitively presented—come together in this startling and essential account of the consequences of our addiction to oil.

Peter Maass is a contributing writer to The New York Times Magazine and has reported from the Middle East, Asia, South America and Africa. He has written as well for The New Yorker, The Atlantic Monthly, The Washington Post and Slate. Maass is the author of Love Thy Neighbor: A Story of War, which chronicled the Bosnian war and won prizes from the Overseas Press Club and the Los Angeles Times. He lives in New York City.

“Powerfully written. . . . Evocative. . . . Despite much hue and cry today, Maass argues, we seem unable to move beyond an oil-based global economy, and we are going to hit a wall soon.”
—The New York Times Book Review

“Perpetually informative. . . . Maass’s book is in a class by itself, as he constructs his relentless indictment on a foundation of first-rate reporting and superb writing.”
—USA Today

“Maass is a keen observer, a fine storyteller and forceful writer, and his book is a readable gem for anyone seeking a primer on the history of oil and its geopolitical ramifications.”
—San Francisco Chronicle

“Authentic, persuasive, and damning. . . . The narrative argument that brings these stories together is persuasive, intelligent, and passionate.”
—The Christian Science Monitor

“Riveting and illuminating. . . . The book is not about oil policy or the energy crisis, at least not primarily; it is a moral reckoning with basic instincts.”
—The Nation

“A nice primer on the history of oil and its geopolitical ramifications.”
—The Houston Chronicle

“A fascinating, nightmarish journey to the far end of the pipeline. If you want to know the true cost of America’s oil addiction—and if even you don’t—you should read this book.”
—Elizabeth Kolbert, author of Field Notes from a Catastrophe

“A disturbing catalogue of the underside of the international oil industry. . . . This is not a dispassionate exploration of sticky business issues; it’s an indictment and a conviction wrapped in one.”
—The Washington Post

“The strength of Crude World, filled with vivid reporting, is that it leaves you no option but to care.”
—The Observer (London)

“A fascinating if alarming book. . . . Nightmare scenarios and grim reality checks are scary stuff, but Maass delivers the bad news in prose that teems with keen observations and well-reported, unforgettable details.”
—Richmond Times-Dispatch

“Crude World gets its energy from Peter Maass’s exhaustive investigation and first-hand experience and results in an illuminating narrative of the true impact of the global dependence on oil. . . . Essential reading for these times and for anyone interested in making the right decisions about our energy future.”
—Robert Redford

“What’s compelling [about Crude World] is the reporting Maass has done from places ruined by dependence on a substance that, he argues convincingly, kills more than it liberates.”
—The Boston Globe

“With the clarity of a hard-boiled investigator and the grace of a fine writer, Peter Maass reveals how oil has cursed the countries that possess it, corrupted those who want it, and wrought havoc on a world addicted to it. Brilliant and compelling.”
—Robert B. Reich, author of Supercapitalism

“A lucid account that places readers in the big picture. . . . [Maass’s] truths are painful and unavoidable. . . . He has written a very brave book.”
—Fredericksburg Free Lance-Star

“Well argued and illustrated. . . . [Maass’s] descriptions of the rape of countries as diverse as Nigeria and Ecuador are all the more devastating for being unpreachy.”
—The Telegraph (London)

“Getting off oil is a great idea for a lot of reasons, like saving the planet’s climate. But Peter Maass gives us another set of bonuses. If you think drug dealing is a dirty business, then meet the biggest drug of all.”
—Bill McKibben, author Deep Economy