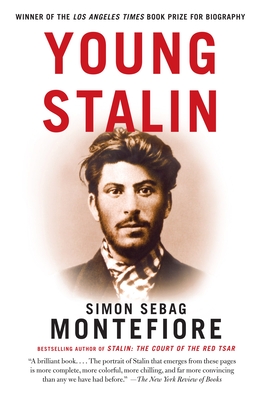 
Not On Our Shelves—Ships in 1-5 Days
From the New York Times bestselling author of The Romanovs—and one of our pre-eminent historians—comes “a meticulously researched, authoritative biography” (The New York Times), the companion volume to the prize-winning Stalin, and essential reading for anyone interested in Russian history.

Based on ten years of research, Young Stalin is a brilliant prehistory of the USSR, a chronicle of the Revolution, and an intimate biography.  Montefiore tells the story of a charismatic, darkly turbulent boy born into poverty, scarred by his upbringing but possessed of unusual talents. Admired as a romantic poet and trained as a priest, he found his true mission as a murderous revolutionary. Here is the dramatic story of his friendships and hatreds, his many love affairs, his complicated relationship with the Tsarist secret police, and how he became the merciless politician who shaped the Soviet Empire in his own brutal image.
SIMON SEBAG MONTEFIORE is a historian of Russia and the Middle East. Catherine the Great and Potemkin was short-listed for the Samuel Johnson Prize. Stalin: The Court of the Red Tsar won the History Book of the Year Prize at the British Book Awards. Young Stalin won the Los Angeles Times Book Prize for Biography, the Costa Biography Award, and le Grande Prix de la biographie politique. Jerusalem: The Biography was a worldwide best seller. Montefiore’s books are published in more than forty languages. He is the author of the novels Sashenka and One Night in Winter, which won the Paddy Power Political Fiction Book of the Year Award in 2014. A Fellow of the Royal Society of Literature, Montefiore graduated from Cambridge University, where he received his PhD. He lives in London.
Winner of the Los Angeles Book Prize for Biography
Winner of the Costa Book Award for Biography
A Christian Science Monitor and Seattle Times Best Book of the Year

“Brilliantly researched. . . . The portrait of Stalin that emerges from these pages is more complete, more colorful, more chilling, and far more convincing than any we have had before.” —The New York Review of Books

“Young Stalin is brilliantly readable, as intricately plotted and full of detail as a good novel, scrupulously researched, and full of hitherto unknown (or unreported) facts about Stalin's life.” —Men's Vogue

“A meticulously researched, authoritative biography. . . . Mr. Montefiore has found the devil in the details, working his way with a fine-tooth comb through previously unread archival material.” —The New York Times

“The most complete, accurate account of the tyrant's early years-a fascinating tale of life in the revolutionary underground, drenched in violence, fear and deceit, filled with a rogue's gallery of bandits, double-agents and terrorists." —The Seattle Times