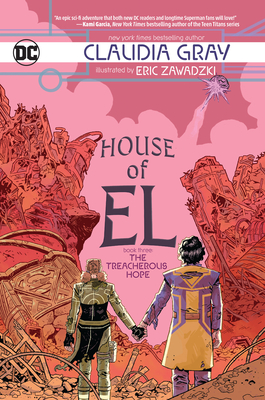 
Coming Soon—Pre-Order Now
Welcome to a brand-new vision of one of comics’ most famous tragedies from New York Times bestselling author Claudia Gray and illustrator Eric Zawadzki.  In this final book of a graphic novel trilogy, two teenagers on opposite sides of the same extinction-level event get drawn deeper into conspiracies that could doom them—if the planet doesn’t self-destruct first.

Sera is a young soldier, bred her entire life to fight for Krypton. She would die for this planet, but she’s never had the time or inclination to enjoy it.  Zahn, however, is a young scientist, full of hope and ideas for how to improve Krypton for all its citizens.  And yet, the cracks in his world are beginning to appear.  In fact, both Sera and Zahn are unique in ways that will soon drive them from their destinies and toward each other—toward a cataclysmic ending to all that they once held true.

In this third and final book, there is no longer any doubt: Sera and Zahn have learned that Krypton’s destruction is assured. General Zod knows this as well, but he doesn’t have the specific information our two young heroes have: the end is imminent and there is no time to save themselves or anyone else. Well, not quite anyone. Jor-El and Lara have finished the space craft that will send their only son, Kal-El, off to another planet that will offer him the best possibility for a new life. But Zahn wonders if it wouldn’t be possible for Sera and him to join the infant on board. Just as they have come to openly express their love for each other, they, and everyone they know are seemingly doomed.

Meanwhile, Zod, still thinking he has time, has concocted an elaborate plot designed to make it apparent that he is the only one who can possibly save Krypton. He believes it will force the removal of the ruling Tribunals and allow Zod to take control of Krypton himself. Zod’s plot will cost the lives of many, and even though Sera knows everyone is doomed regardless, she can’t stand by and witness this senseless and needless loss of life.

In the end, Zod is betrayed and stands trial for treason. Sera, though now hated by Zod and his loyalists, stands ready to receive the same punishment herself—banishment to the Phantom Zone. And while this otherwise would be considered a horrible sentence, Zahn views it as a possible means to avoid the ending that faces everyone else on Krypton. But how will he be able to join his beloved in her fate and do it before their doomed planet explodes?
Claudia Gray is the New York Times bestselling author of many science fiction and paranormal fantasy books for young adults, including the Defy the Stars series, the Firebird series, the Evernight series, the Spellcaster series, and Fateful. She's also had a chance to work in a galaxy far, far away as the author of the Star Wars novels Lost Stars, Bloodline, Master and Apprentice, and Leia, Princess of Alderaan. Born a fangirl, she loves obsessing over geeky movies and TV shows, as well as watching any series with British people solving murders in picturesque settings. She will take your Jane Austen trivia challenge any day, anytime. Currently she lives in New Orleans.


Eric Zawadzki is most well-known for the critically acclaimed graphic novels THE DREGS and ETERNAL. His most recent work in comics is HEART ATTACK, for Image / Skybound comics, which he co-created and illustrated.