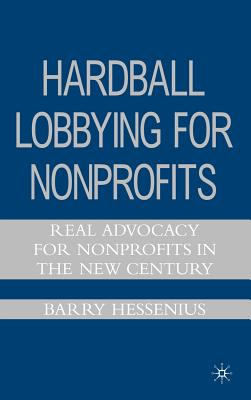 
Not On Our Shelves—Ships in 1-5 Days
This is a no-holds-barred, comprehensive, real-world guide to building political power and successfully lobbying for nonprofits in the 21st century, written by an insider who has been in the trenches as both a lobbyist and a government official.
An author, consultant and public speaker, Barry Hessenius published his work: Hardball Lobbying for Nonprofits in 2007 (Macmillan & Company, New York). Since then he has been conducting seminars and workshops for nonprofit organizations on the topic of Advocacy and Lobbying, developed a mini-course curriculum in public policy, advocacy and lobbying for university nonprofit and business school degree programs, and has been a panelist and keynote speaker on the topic at nonprofit conferences and meetings. He also conducted a two phase study with reports released in 2007 and 2009 for the William & Flora Hewlett Foundation on the issue of youth involvement and generational management & succession in the arts, culture and environmental fields, and has developed a workshop training module for managing the generations in the workplace. He is the author of BARRY'S BLOG - 'news, advice and opinion for arts administrators' - hosted by the WESTERN STATES ARTS FEDERATION - with a 10,000 subscriber base. Barry was appointed Director of the California Arts Council by Governor Gray Davis in March 2000 and was a member of his Cabinet for nearly five years. At the CAC he managed a budget of $70 million, an annual $32 million grants pool, and supervised a staff of 54. Mr. Hessenius was previously the President and Chief Executive Officer of the California Assembly of Local Arts Agencies, a nonprofit statewide service provider organization for 250 local arts councils. He has been an advisor to the National Policy Committee of Americans for the Arts and the President's Committee for the Arts & Humanities (Clinton Administration). A founding member and Vice-Chair of California Arts Advocates and the United Statewide Community Arts Association, Mr. Hessenius has also been a board member of the National Association of State Arts Agencies (NASAA), the California Alliance for Arts Educators (CAAE), California CultureNet, the California State Summer School for the Arts, the California Travel Industry Association (CalTIA), and a member of the State Superintendent's Task Force on Arts Education. He has authored several studies including the California Arts Advocacy Handbook, the Local Arts Agency Funding Study for the Aspen Institute and the City Arts Agency Tool Kit. He served a term as Executive Director of Alonzo King's LINES Ballet Company in San Francisco in 2005 / 2006. He is currently on the Board of Directors of the San Francisco Architectural Foundation.