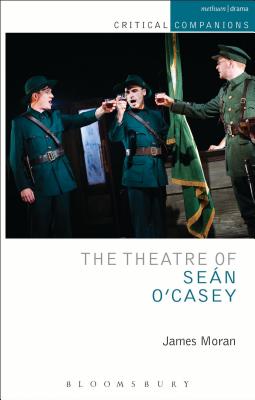 This Critical Companion to the work of one of Ireland's most famous and controversial playwrights, Sean O'Casey, is the first major study of the playwright's work to consider his oeuvre and the archival material that has appeared during the last decade. Published ahead of the centenary of the 1916 Easter Rising in Ireland with which O'Casey's most famous plays are associated, it provides a clear and detailed study of the work in context and performance.

James Moran shows that O'Casey not only remains the most performed playwright at Ireland's national theatre, but that the playwright was also one of the most controversial and divisive literary figures, whose work caused riots and who alienated many of his supporters. Since the start of the 'Troubles' in the North of Ireland, his work has been associated with Irish historical revisionism, and has become the subject of debate about Irish nationalism and revolutionary history. Moran's admirably clear study considers the writer's plays, autobiographical writings and essays, paying special attention to the Dublin trilogy, The Shadow of a Gunman, Juno and the Paycock, and The Plough and the Stars. It considers the work produced in exile, during the war and the late plays. The Companion also features a number of interviews and essays by other leading scholars and practitioners, including Garry Hynes, Victor Merriman and Paul Murphy, which provide further critical perspectives on the work.
James Moran is Head of Drama in the School of English Studies at the University of Nottingham, UK.