The Artful Dickens: The Tricks and Ploys of the Great Novelist (Hardcover) 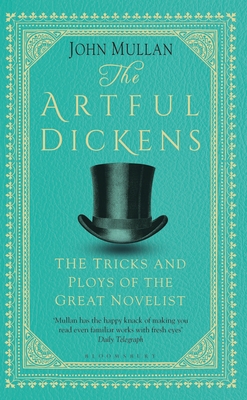 The Artful Dickens: The Tricks and Ploys of the Great Novelist (Hardcover)

Discover the tricks of a literary master in this essential guide to the fictional world of Charles Dickens.

From Pickwick to Scrooge, Copperfield to Twist, how did Dickens find the perfect names for his characters?

What was Dickens's favourite way of killing his characters?

When is a Dickens character most likely to see a ghost?

Why is Dickens's trickery only fully realised when his novels are read aloud?

In thirteen entertaining and wonderfully insightful essays, John Mullan explores the literary machinations of Dickens's eccentric genius, from his delight in clichés to his rendering of smells and his outrageous use of coincidences. A treat for all lovers of Dickens, this essential companion puts his audacity, originality and brilliance on full display.

John Mullan is a professor in the English department at UCL. He writes the regular 'Guardian Book Club' column on fiction in the Guardian and frequently appears on the BBC's Review Show. He was a judge of the 'Best of the Booker Prize' in 2008 and a judge of the Man Booker Prize itself in 2009. He has lectured widely on Jane Austen in the UK and also in the US, and makes regular appearances at the UK literary festivals.

“Mullan is at his heart a critic of style, and the most rewarding parts of The Artful Dickens are those in which he turns his eye on the various maneuvers by which the novelist’s prose comes alive. Even so obvious a device as the as-if construction affords a key to the working of Dickens’s imagination, since he characteristically adopts the formula, Mullan shows, not to clarify a point but to fantasize.” - Ruth Bernard Yeazell, New York Review of Books

“Excellent … The closer we look, the better the novels get. The Artful Dickens is both an exposure of the trickster’s methods and a celebration of close reading … Enlightening … If Mullan put into his hat a creator of gargoyles and spinner of melodrama, he pulled out an innovator who broke all the rules. The Artful Dickens made me feel that I had been in some form of trance during my earlier reading of these novels” - Frances Wilson, Guardian

“[Mullan] has a gift for synthesizing information and presenting it in an enjoyable fashion, and he provides here a dazzlingly close examination of the Dickens oeuvre with an emphasis on style and literary technique... The Artful Dickens shows us a singular craftsman who was of his time and, simultaneously, timeless.” - The Washington Independent Review of Books

“Splendid … Mullan’s book is too rich to capture in a review. Each chapter shoots off in a fresh direction and illuminates it … You must, and should, read Mullan’s book. Even if you know a lot about Dickens you will find revelations in it, and if you know nothing about Dickens and want to learn what makes him great it will be the perfect appetizer” - John Carey, Sunday Times

“Gloriously entertaining and astute, this lush, intimate journey through Dickens's storytelling strategies is an absolute treat. I loved it.” - Sarah Waters

“Mullan has taken the most popular Victorian novelist and, by holding different facets of his literary technique up to the light, found new angles from which to admire the work. By the end of this teacherly but readable analysis, Dickens’s novels are sparkling as if spring-cleaned … Surrendering to Mullan’s guided tour, we are swept into the world of Pip and Magwitch, Scrooge, the Boffins, Lady Dedlock, and a host of other familiar and much loved, loathed or pitiable characters from his extensive portrait gallery … The Artful Dickens is a fulsome tribute to a writer whose commonly perceived flaws are part of what makes him great” - Rosemary Goring, Herald

“The Artful Dickens is full of such nuggets. Put it on your Christmas list and spend the post-goose collapse reading the good bits aloud” - Laura Freeman, The Times

“John Mullan is that rare bird, a literary critic you want to read. His vigorous prose style, his generosity and acumen, his freedom from jargon, and the fact that he is an entertainer in his own right, make him the ideal guide to Dickens' genius. This is a marvellous, endlessly illuminating book – pointing even the most knowledgeable Dickensians to scenes they hadn’t noticed, sentences they hadn’t remembered, “tricks and ploys” they’d never sufficiently appreciated. It doesn’t go on the shelf alongside other critics; it goes on the shelf alongside Dickens” - Howard Jacobson

“In this brilliantly sharp book, John Mullan delves into all the ways in which the Great Boz grabs our attention on page one of his novels and refuses to let go until we are deposited a thousand pages later … Mullan is a professor of English literature, which means that he has a forensic eye for how Dickens produces his spellbinding effects … This vastly entertaining book gives the sense that Mullan is a man with a mission … Mullan makes us see that Charles Dickens was one of the most artful, which is to say skilled, writers the world has ever seen” - Kathryn Hughes, Mail on Sunday

“A feast of Dickensian knowledge” - The Times

“It’s an eye-opening analysis of Dickens’s fiction by a distinguished scholar, and of genuine interest to first-time readers as well as devoted Dickensians. But it’s also an extremely useful (and entertaining) handbook on the craft of writing, no matter the genre or the century.” - The Historical Novels Review