The Year of Lear: Shakespeare in 1606 (Paperback) 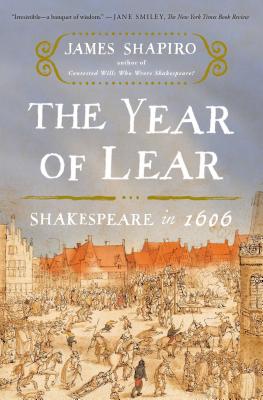 The Year of Lear: Shakespeare in 1606 (Paperback)


In Stock—Click for Locations
Preeminent Shakespeare scholar James Shapiro, author of Shakespeare in a Divided America, shows how the tumultuous events in 1606 influenced three of Shakespeare’s greatest tragedies written that year—King Lear, Macbeth, and Antony and Cleopatra. “The Year of Lear is irresistible—a banquet of wisdom” (The New York Times Book Review).

In the years leading up to 1606, Shakespeare’s great productivity had ebbed. But that year, at age forty-two, he found his footing again, finishing a play he had begun the previous autumn—King Lear—then writing two other great tragedies, Macbeth and Antony and Cleopatra.

It was a memorable year in England as well—a terrorist plot conceived by a small group of Catholic gentry had been uncovered at the last hour. The foiled Gunpowder Plot would have blown up the king and royal family along with the nation’s political and religious leadership. The aborted plot renewed anti-Catholic sentiment and laid bare divisions in the kingdom.

It was against this background that Shakespeare finished Lear, a play about a divided kingdom, then wrote a tragedy that turned on the murder of a Scottish king, Macbeth. He ended this astonishing year with a third masterpiece no less steeped in current events and concerns: Antony and Cleopatra.

“Exciting and sometimes revelatory, in The Year of Lear, James Shapiro takes a closer look at the political and social turmoil that contributed to the creation of three supreme masterpieces” (The Washington Post). He places them in the context of their times, while also allowing us greater insight into how Shakespeare was personally touched by such events as a terrible outbreak of plague and growing religious divisions. “His great gift is to make the plays seem at once more comprehensible and more staggering” (The New York Review of Books). For anyone interested in Shakespeare, this is an indispensable book.
James Shapiro is the Larry Miller Professor of English at Columbia University, where he has taught since 1985. He is the author of several books, including 1599 and Contested Will, and is the recipient of many awards and fellowships. Shapiro is a Governor of the Folger Shakespeare Library. He lives in New York with his wife and son.
The temptation for someone reviewing a readable and revelatory work like The Year of Lear is to babble on about the amazing secrets its author has uncovered. . . . [The book] is irresistible—a banquet of wisdom.”
— Jane Smiley

“A meticulous narrative of a momentous year in the life of the playwright and a masterpiece of intelligent literary criticism.”
— Colm Tóibín

“James Shapiro [is] the liveliest and most accessible of Bardologists. . . . The book is crammed with stimulating research that again and again produces startling connections. . . . It is to be hoped that Mr. Shapiro might be persuaded to write a book for every year of Shakespeare's life: Then we might finally find ourselves face to face with the Sphinx of English literature.”
— Simon Callow

"In The Year of Lear, Shapiro takes a closer look at the political and social turmoil that contributed to the creation of three supreme masterpieces. . . . Exciting and sometimes revelatory."
— Michael Dirda

“Illuminating. . . . Shapiro captures a Shakespeare moved by – and moving – history.”
— The New Yorker

“Shapiro has a marvelous ability to use his formidable scholarship, not to pluck out the heart of Shakespeare’s mysteries, but to put the beating heart of the contemporary back into them. His great gift is to make the plays seem at once more comprehensible and more staggering.”
— Fintan O'Toole

"Shapiro's investigation of Shakespeare's professional fortunes is as fascinating as his scrutiny of the plays. . . . [His book] draws on a mountain of reading, yet is persistently original. It takes us onto the streets of Shakespeare's London, and it reminds us of the brutal culture from which his plays sprang."
— John Carey

“No one writes about Shakespeare as Jim Shapiro does; it's so immediate and alive. . . . His passion for Shakespeare, his excitement and pure joy infect everyone he comes in contact with and absolutely come through in each of his books.”
— F. Murray Abraham

"James Shapiro’s insightful new book, The Year of Lear: Shakespeare in 1606, performs a kind of archaeological excavation of the three plays Shakespeare wrote in this year – King Lear, Macbeth, and Antony and Cleopatra – to reveal the rich matrix of factors that molded their themes and language."
— Nick Romeo

"Like other Shapiro works, [The Year of Lear] is a brilliant, acessible fusion of meticulously researched historical narrative and keen-eyed literary criticism."
— Celia Wren

“While many contemporary literary scholars are devoted to deconstructing literature, and many more to only the narrowest lines of inquiry, Shapiro has the knack of piecing together those few scraps and fragments into a coherent — and persuasive — narrative of a writer at work at a specific place and time. . . . A remarkable, completely fresh look at how literature, and history, come to be.”
— David Walton

"Probing and original. . . . Shapiro shows how [Shakespeare] was not only for all time, but also very much of his age."
— Sameer Rahim

"Shakespearean scholar Shapiro links the tumultuous events of 1605 and 1606 to three of the Bard's greatest works. . . . Shapiro's discoveries of long-lost sources and missed connections make this a fascinating tale. His well-written, scholarly exploration will stand as an influential work that is a joy to read.”
— Kirkus Reviews (starred review)