All Things Shining: Reading the Western Classics to Find Meaning in a Secular Age (Paperback) 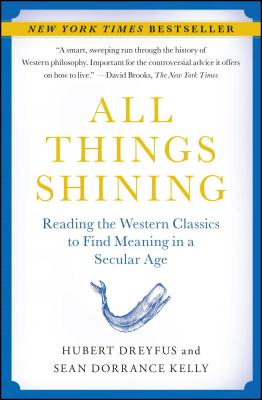 All Things Shining: Reading the Western Classics to Find Meaning in a Secular Age (Paperback)


Not On Our Shelves—Ships in 1-5 Days
An inspirational book that is “a smart, sweeping run through the history of Western philosophy. Important for the way it illuminates life today and for the controversial advice it offers on how to live” (The New York Times).

“What constitutes human excellence?” and “What is the best way to live a life?” These are questions that human beings have been asking since the beginning of time. In their critically acclaimed book, All Things Shining, Hubert Dreyfus and Sean Dorrance Kelly argue that our search for meaning was once fulfilled by our responsiveness to forces greater than ourselves, whether one God or many. These forces drew us in and imbued the ordinary moments of life with wonder and gratitude. Dreyfus and Kelly argue in this thought-provoking work that as we began to rely on the power of our own independent will we lost our skill for encountering the sacred.

Through their original and transformative discussion of some of the greatest works of Western literature, from Homer’s Odyssey to Melville’s Moby Dick, Dreyfus and Kelly reveal how we have lost our passionate engagement with the things that gave our lives purpose, and show how, by reading our culture’s classics anew, we can once again be drawn into intense involvement with the wonder and beauty of the world.

Well on its way to becoming a classic itself, this inspirational book will change the way we understand our culture, our history, our sacred practices, and ourselves.
Hubert Dreyfus is a leading interpreter of existential philosophy.  He has taught at UC Berkeley for more than 40 years.

Sean Dorrance Kelly is Professor of Philosophy and Chair of the Department of Philosophy at Harvard University.  He is also Co-Chair of Harvard’s interdisciplinary committee for the study of Mind, Brain, and Behavior. Before arriving at Harvard, Kelly taught at Stanford and Princeton, and he was a Visiting Professor at the Ecole Normale Supérieure in Paris. He is considered a leading interpreter of the French and German tradition in phenomenology, as well as a prominent philosopher of mind.  Kelly has published articles in numerous journals and anthologies and has received fellowships or awards from the Guggenheim Foundation, the NEH, the NSF and the James S. McDonnell Foundation, among others.
“[A]n inspirational book but a highly intelligent and impassioned one.… compelling.” —The Wall Street Journal

“Offers a meditation on the meaning of life, in a sharp, engaging style …” New York Times Book Review