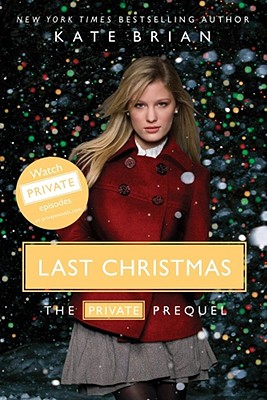 This is book number 13 in the Private series.

Ariana Osgood has everything an Easton Academy girl could want: straight A's, the perfect boyfriend, and a coveted spot in exclusive Billings House. But on the first night of Christmas vacation, a blizzard traps her on campus with irresistible bad-boy Thomas Pearson. Alone. Instead of snuggling with her boyfriend next to a cozy fire in Vermont, she's huddling for warmth with Thomas in Ketlar House.

As the snow transforms Easton into a winter wonderland, Ariana finds herself falling for Thomas. But someone is watching their clandestine romance unfold, someone intent on turning their holiday weekend into a nightmare...

Last Christmas reveals the secret of what really happened before Private began -- and the shocking truth will change everything for fans of Kate Brian's bestselling series.
Kate Brian is the author of the NY Times and USA Today best-selling Private series and it's spin-off series, Privilege. She has also written many other books for teens including Sweet 16 and Megan Meade's Guide to the McGowan Boys.