Ada Twist and the Perilous Pants: The Questioneers Book #2 (Hardcover) 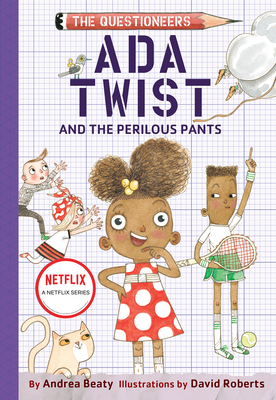 Ada Twist and the Perilous Pants: The Questioneers Book #2 (Hardcover)


In Stock—Click for Locations
Now a Netflix series!

In Ada Twist and the Perilous Pants, Ada must rely on her curious mind, her brave spirit, and her best pals Rosie Revere and Iggy Peck to solve a mystery in her own backyard.

Ada Twist is full of questions. A scientist to her very core, Ada asks why again and again. One question always leads to another until she’s off on a journey of discovery! When Rosie Revere’s Uncle Ned gets a little carried away wearing his famous helium pants, it’s up to Ada and friends to chase him down. As Uncle Ned floats farther and farther away, Ada starts asking lots of questions: How high can a balloon float? Is it possible for Uncle Ned to float into outer space? And what’s the best plan for getting him down?

Collect them all! Add these other STEM favorites from #1 New York Times bestselling team Andrea Beaty and David Roberts to your family library today!

David Roberts has illustrated many children’s books, including the Questioneers series, The Cook and the King, and Happy Birthday, Madame Chapeau. He lives in London, where, when not drawing, he likes to make hats.
"The Questioneers—Rosie the engineer, Iggy Peck the architect, and Ada the scientist—work together, asking questions like scientists . . . Adventure, humor, and smart, likable characters make for a winning chapter book."
— Kirkus Reviews

"Beaty’s compelling text keeps readers moving like a swift wind through the plot’s twists and turns . . . Roberts’s illustrations, which will be familiar to fans of the picture book series, complement the book’s readability with humorous, detailed artwork . . . A compelling early reader that packs plenty of information into a high-flying adventure."
— School Library Journal