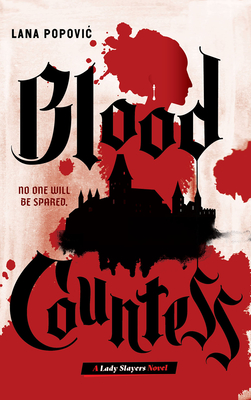 In 17th century Hungary, Anna Darvulia has just begun working as a scullery maid for the young and glamorous Countess Elizabeth Báthory. When Elizabeth takes a liking to Anna, she’s vaulted to the dream role of chambermaid, a far cry from the filthy servants’ quarters below. She receives wages generous enough to provide for her family, and the Countess begins to groom Anna as her friend and confidante. It’s not long before Anna falls completely under the Countess’s spell—and the Countess takes full advantage. Isolated from her former friends, family, and fiancé, Anna realizes she’s not a friend but a prisoner of the increasingly cruel Elizabeth. Then come the murders, and Anna knows it’s only a matter of time before the Blood Countess turns on her, too.

Lana Popovic is the author of Blood Countess, Wicked Like a Wildfire, and Fierce Like a Firestorm. Born in Serbia, she lived in Hungary, Bulgaria, and Romania before moving to the United States, where she studied psychology and literature at Yale University, law at Boston University, and publishing and writing at Emerson College.
"Popovic balances lush, romantic language with gruesome imagery in this tale of innocence lost.Readers will likely be inspired to do actual research into Lady Bathory’s murderous misdeeds."
— Booklist

"Popovic also touches on how a patriarchal society can drive women to extremes without letting the truly terrifying Bathory, or Anna, off the hook for their own actions. . . A lush and bloody historical thriller."
— Kirkus Reviews