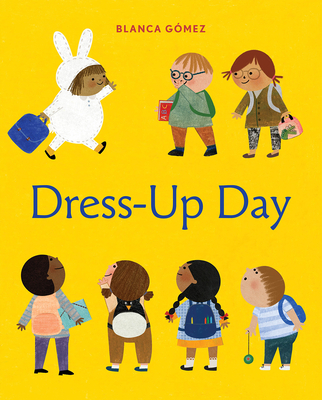 
On Our Shelves Now at:
After missing her class costume party, a girl decides she doesn’t need an excuse to dress up in this charming, relatable school story

When a little girl is home sick for dress-up day at school, she decides there’s no need to miss out entirely: She’ll just wear her rabbit costume the next day!

But when the next day arrives and she’s the only one in costume, it doesn’t feel like such a great idea, after all. Can a little bit of confidence and an unexpected new friend turn a self-conscious moment into a wonderful one?

Funny, endearing, and relatable to any kid who’s ever felt insecure, Dress-Up Day is an ode to friendship, embracing individuality, and putting yourself out there no matter the occasion.

Blanca Gómez is a much sought-after picture book illustrator and the author-artist of Bird House. In a starred review, Kirkus called One Family “visually striking,” and the New York Times called her illustrations “adorable.” “Wonder-filled and delightful” were the words Kirkus used to describe City Moon in another starred review. Blanca lives in Madrid, Spain.
**STARRED REVIEW**
"There’s an emotional change on almost every page of this picture book as Gómez presents the possibility that moments of chagrin don’t last forever, and that disasters can morph into delight."
— Publishers Weekly

**STARRED REVIEW**
"Despite working in deceptively simple forms, Gómez effectively portrays the narrator’s emotions through body language and facial expressions, enhancing and expanding the text. This lovely little book celebrates one child’s experience in a welcoming, diverse environment and will speak to a broad ­audience."