Biking with Grandma: A "Wish You Were Here" Adventure (Hardcover) 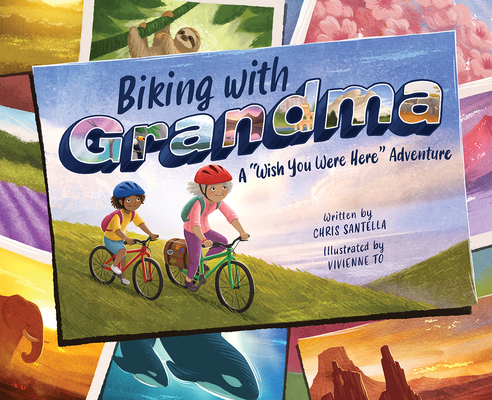 Biking with Grandma: A "Wish You Were Here" Adventure (Hardcover)

By Chris Santella, Vivienne To (Illustrator)


In Stock—Click for Locations
Sam and their intrepid grandma bike around the world together in this sweet intergenerational adventure!

Grandma Rose's job is having amazing adventures around the globe and writing about them. Her next trip is extra-special—because this time, Sam is tagging along! Together Sam and Grandma Rose will bike and explore national parks, villages, and sprawling cities, from bear sightings in Alberta to sloths in Costa Rica, and from gelato in Italy to bánh mi in Vietnam.

Writing home in postcards, Sam details tidbits about each location's language, culture, and natural beauty. Sam soon finds out that Grandma is full of surprises—she’s up for any challenge, and wow, can she shred down those trails. Pedaling side-by-side, Grandma Rose will teach Sam to be brave and embrace new experiences both on a bike and in life. Whether trekking up majestic mountains or simply gazing up at the night sky, Sam discovers that the journey is not about the places you go—it’s the moments you share, big and small.

Chris Santella is the author of more than 20 books, including 17 titles in the Fifty Places series. He is a regular contributor to the Washington Post, the New York Times, Trout, and The Fly Fish Journal, and resides in Portland, Oregon. When he’s not writing, Santella can often be found swinging flies for steelhead on rivers around the Pacific Northwest or strumming guitar in his band, Catch & Release. Diana Helmuth is a travel writer who has written for Curbed and The Bold Italic. She is currently working on a humor/advice backpacking book for Mountaineers Press, slated for next year. Most of her current writing is on the great outdoors and millennial culture. She lives in San Francisco.

Vivienne To is an illustrator and visual development artist working in film and publishing. The Sloth Who Slowed Us Down is her first picture book.
"Not only will kids get an exciting travelogue and a clever way to introduce geography, they will also get pointers on letter writing and developing careful observation skills."
— Booklist