The King's Painter: The Life of Hans Holbein (Hardcover) 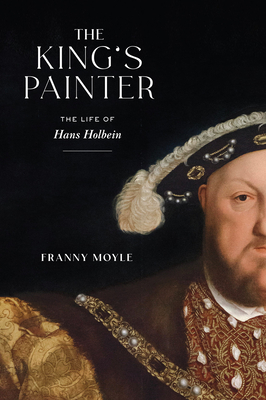 The King's Painter: The Life of Hans Holbein (Hardcover)


On Our Shelves Now at:
From a distinguished art historian, a dramatic reappraisal of Renaissance master Hans Holbein, whose art shaped politics and immortalized the Tudors

Hans Holbein the Younger is chiefly celebrated for his beautiful and precisely realized portraiture, which includes representations of Henry VIII, his advisors Thomas More and Thomas Cromwell, his wives Jane Seymour and Anne of Cleves, and an array of the Tudor lords and ladies encountered during the course of two sojourns in England. But beyond these familiar images, which have come to define our perception of the age, Holbein was a multifaceted genius: a humanist, satirist, and political propagandist, and a deft man whose work was rich in layers of symbolism and allusion.

In The King’s Painter, biographer Franny Moyle traces and analyzes the life and work of an extraordinary artist against the backdrop of an era of political turbulence and cultural transformation, to which his art offers a subtle and endlessly refracting mirror. It is a work of serious scholarship written for a wide audience.
Franny Moyle is a British television producer and author. Her first book, Desperate Romantics, was adapted into the BBC drama serial of the same title. Her second book, Constance: The Tragic and Scandalous Life of Mrs. Oscar Wilde, was published in 2011 to critical acclaim. In 2016 she released Turner: The Extraordinary Life and Momentous Times of J.M.W. Turner.

“A biography entirely suited to its subject. … this is a great, thrusting codpiece of a book. It is big, bombastic, and richly brocaded … A triumph.”—The Times (UK)

“Evokes the painter and his world as vividly as a Holbein masterpiece. Beautifully written and illustrated, this book is a must for lovers of Tudor history.”—Tracy Borman, author of Thomas Cromwell and The Private Lives of the Tutors

“Full of insight ... This is a gorgeous book, to which I am sure I shall return again and again.”—Dan Jones, author of The Plantagenets, The Wars of the Roses, and The Templars

“One of the great strengths of Moyle’s book is it allows you to view Holbein’s enormous versalitity. … Time and again, though, one returns awestruck to the overwhelming sophistication of Holbein’s gift for verisimilitude.”—The Spectator