The Most Haunted House in America (Hardcover) 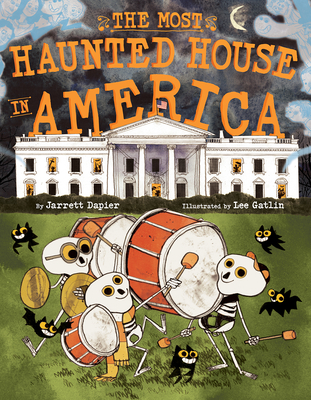 The Most Haunted House in America (Hardcover)


On Our Shelves Now at:
A rollicking, spooky-fun trip through the most haunted home in America: the White House!

It was late October, the moon was pale,
late in October when it came by mail:
a letter, a missive, a kind invitation
to drum at THE MOST HAUNTED HOUSE IN THE NATION!

When the Skeleton Drummers receive an invitation from the First Lady to perform at the biggest Halloween party of a lifetime—or afterlife—the band must pack their instruments, rise from the earth, and prepare to rock the White House. With gusto and bone-rattling beats, the skeletons BOOM! BANG! and CLANG! as the crowd of trick-or-treaters dance on the president's lawn. But when the party moves inside, something's not quite right: there's a chill in the air and a prickle of fright. There's one thing you might not know: The White House is haunted from top to toe!

With rhyming, rhythmic text from Jarrett Dapier and wonderfully macabre illustrations from Lee Gatlin, this musical tour of America's most famous home is full of spooky surprises at every turn.

Jarrett Dapier is a writer, librarian, and lifelong drummer. His books include Jazz For Lunch!, which received a starred review in Kirkus, and Mr. Watson’s Chickens, which received multiple starred reviews and was named a Best Picture Book of the Year by BookPage and a Best Book of the Year by NPR. He lives in Evanston, IL with his family and their many pets. Lee Gatlin has been drawing for as long as he can remember. He is the illustrator of the picture book Monster School by Kate Coombs and Shout Out for the Fitzgerald-Trouts by Esta Spalding. He was born and raised in south Alabama, but he makes comics and art in Athens, Georgia, where he lives with his wife, three children, and two cats.
"No bones about it. This book has pep, drive, and the perfect vibe for the Halloween season." —Kirkus Reviews

"The illustrations and narrative surrounding the most haunted house in America are more than enough to keep readers entertained."—School Library Journal

"The text’s rhythm and rhyme capture the Skeleton Drummers’ beat, while the cartoon illustrations are a riot of movement and detail forged in Halloween hues."—Booklist