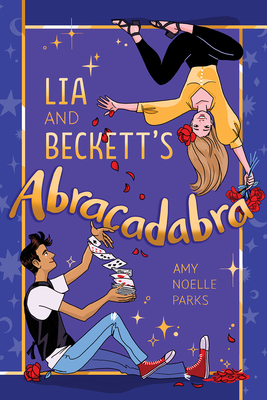 Seventeen-year-old Lia Sawyer is thrilled to get a mysterious invitation from her grandmother to compete in a stage magic contest––even though her parents object. But she’s going to be judged by a bunch of old-school magicians who think that because she’s a girl, her only magical talents lie in wearing sparkly dresses, providing distractions, and getting sawed, crushed, or stretched. And Lia can’t ask her grandmother for help because she’s disappeared, leaving behind only her best magic tricks, a few obscure clues, and an order to stay away from Blackwell boys, the latest generation of a rival magic family. Lia totally plans to follow her grandmother’s rule––until the cute boy she meets on the beach turns out to be Beckett Blackwell, son of the biggest old guard magical family there is. Witty and romantic, Lia and Beckett’s Abracadabra is a YA rom-com with a magical twist!

Amy Noelle Parks is a professor at Michigan State University. When she’s not using One Direction lyrics as a writing prompt, she’s helping future teachers recover from the trauma of years of school mathematics. She lives in Michigan with her husband and two daughters.
**STARRED REVIEW**
"The romance sizzles with slow-burn longing. . .The author crafts captivating descriptions of the various magic acts and ensures that even the supporting characters have fleshed-out storylines. . .An enchanting enemies-to-lovers romance."
— Kirkus Reviews

"The romance between Lia and Beckett is full of excellent banter and slow-burn chemistry. . .The behind-the-scenes peek into the world of illusions and stage magic will delight even readers without a strong interest in magic."
— School Library Journal

"Lia and Beckett’s chemistry is no illusion; Parks deftly merges their gentle blossoming romance with the mystique of conjuring, mind games, and card tricks to deliver an intriguing look into the behind-the-scenes world of stage magic, couched in a playful romantic comedy."
— Publishers Weekly