Aaron Slater and the Sneaky Snake (The Questioneers Book #6) (Hardcover) 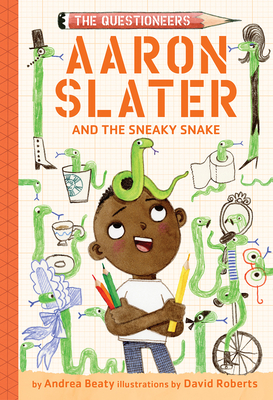 Aaron Slater and the Sneaky Snake (The Questioneers Book #6) (Hardcover)

Zookeeper Fred loves snakes, but his favorite is a tiny green snake named Vern. Vern is sneaky and constantly tries to hide in Fred’s lunch. When Vern gets loose in the zoo and lands atop a boy’s head, it’s trouble!

A few citizens demand that all the snakes must go and the Mayor closes the zoo until the City Council decides what to do. Is Vern a menace? Are the snakes a danger to society? Or a valuable resource for everyone? Who gets to decide?

The Questioneers need all their talents to help Zookeeper Fred, but in the end, it’s Aaron’s art which leads the way.
Andrea Beaty is the author of many beloved children’s books, including the bestselling Questioneers series; Attack of the Fluffy Bunnies; Happy Birthday, Madame Chapeau; and One Girl. She lives just outside Chicago.

David Roberts has illustrated many children’s books, including the Questioneers series, The Cook and the King, and Happy Birthday, Madame Chapeau. He lives in London, where, when not drawing, he likes to make hats.