What Shall I Wear?: The What, Where, When, and How Much of Fashion, New Edition (Hardcover) 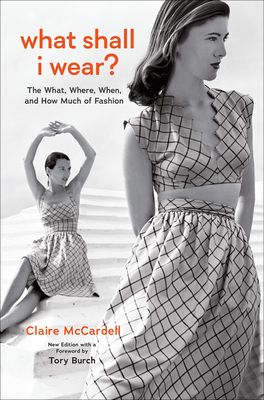 What Shall I Wear?: The What, Where, When, and How Much of Fashion, New Edition (Hardcover)

First published in 1956, What Shall I Wear? is revolutionary fashion designer Claire McCardell’s collection of fashion wisdom and philosophy, and a vivacious guide to looking effortlessly stylish. This new edition of the sought-after classic features a foreword by iconic designer Tory Burch and a color insert of photos from McCardell’s collections.

“The testament to great design, Claire McCardell’s dresses look fresh, contemporary, and desirable eight decades after they were made, as the Costume Institute’s 2022 exhibit In America: An Anthology of Fashion demonstrated.” —Nicole Phelps, global director, Vogue Runway and Vogue Business

“Among the many surprises and insights I discovered in McCardell’s valuable book is that she wanted to call it Fashion is Fun. That may also be the secret behind her genius and enduring influence—she refused to take fashion too seriously.” —Cathy Horyn, New York Magazine

“The first designer to create a cohesive vision rooted in the American lifestyle of ease, McCardell and her contributions as a designer and a woman in business are often overlooked. Tory Burch’s new foreword . . .puts this American treasure in her rightful place.” —Constance White, fashion editor and author of How to Slay: Inspiration from the Queens and Kings of Black Style

“Claire McCardell’s guiding philosophy of dressing with ease in afunctional, fashionable American look was groundbreaking—and feminist—for her times. And it continues to resonate globally on the runways and in closets today.” —Booth Moore, executive editor, Women’s Wear Daily

Claire McCardell (1905–1958) pioneered a style of clothing both casual and chic. In 1990 Life magazine named her one of the 100 most important Americans of the 20th century, and in 1955, when she was on the cover of Time magazine, she was only the third fashion designer to achieve that honor. She attended Parsons School of Design in New York and studied in Paris, learning to construct clothing by taking apart Vionnet samples. As head designer of Townley Frocks, she was one of the first American designers to have name recognition, as the company began to sell its fashions branded as “Claire McCardell Clothes by Townley.” She was the recipient of two Coty Awards and won the first American Sportswear Designs Award from Sports Illustrated magazine. Her work is in museums across the country and has been the subject of retrospectives at the Smithsonian and the Fashion Institute of Technology.

Tory Burch is CEO and designer of Tory Burch, an American lifestyle brand known for color, print, and eclectic details. Raised in Valley Forge, Pennsylvania, Tory Burch graduated from the University of Pennsylvania with a degree in art history, and then moved to New York to pursue a career in the fashion industry. She worked in public relations and marketing for influential American designers before launching Tory Burch in 2004 with a small boutique in Manhattan and toryburch.com. A dedicated philanthropist, Tory launched the Tory Burch Foundation in 2009 to support the economic empowerment of women entrepreneurs and their families in the United States.

Tory Burch has been recognized with numerous awards, including the CFDA for Accessory Designer of the Year, Glamour’s Women of the Year, Forbes’ Most Powerful Women in the World, and Vanity Fair’s International Best-Dressed List. Tory lives in New York City with her three sons.

“Don’t Get Dressed Without Reading This Book…There’s something about a book’s materiality and authorial style that finds common cause with the catwalk. If in doubt, simply spend some time with Ms. McCardell, whose advice accessorizes the mind, not just the house — and costs less, these days, than the price of a tube of haute lipstick.”
— The New York Times

“In our rule-free, anything’s-a-trend world, you’d think the last thing we need is a book telling women how to get dressed. And yet! Claire McCardell’s What Shall I Wear? The What, Where, When, and How Much of Fashion, a witty and slender book first released in 1956 and now back in print with an introduction by Tory Burch, is the best and most considerate fashion book I’ve read this year.”
— Harper's Bazaar.com