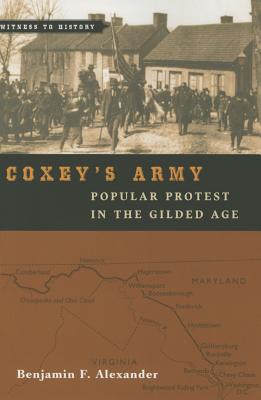 The engrossing tale of the first audacious protest march on Washington--a precursor of the Occupy movement.

In 1893, after a major British bank failure, a run on U.S. gold reserves, and a late-June stock-market crash, America was in the throes of a serious economic depression. Unemployment rose, foreclosures climbed, and popular unrest mounted. By the following spring, businessman and Populist agitator Jacob S. Coxey was fed up with government inactivity in the face of the crisis. With the help of eccentric showman Carl Browne, he led a group of several hundred unemployed wage earners, small farmers, and crossroads merchants on a march from Massillon, Ohio, to Washington, D.C., to present a "petition in boots" for government-financed jobs building and repairing the nation's roads. On May 1, the Coxeyites descended on the center of government, where Coxey attempted to deliver a speech on the Capitol steps. The police attacked, a melee ensued, and Coxey and Browne spent a month in jail. Meanwhile, other Coxey-inspired contingents were on their way east from places as far away as San Francisco and Portland. Some of them even hijacked trains along the way.

Who was Coxey, and what motivated him--along with the angry marchers who joined his cause? What did other Americans think of the protesters? Was there ever any chance that the protesters' demands would be met? Where did the agitators fit in with the politics of their day, and how did their actions jibe with the other labor-related protests happening that year? In this concise and gripping narrative, Benjamin F. Alexander contextualizes the march by vividly describing the misery wrought by the Panic of '93. Alexander brings both Coxey and his fellow leaders to life, along with the reporters and spies who traveled with them and the diverse group of captivated newspaper readers who followed the progress of the marches and train heists.

Coxey's Army explains how the demands of the Coxeyites--far from being the wild schemes of a small group of cranks--fit into a larger history of economic theories that received serious attention long before and long after the Coxey march. Despite running a gauntlet of ridicule, the marchers laid down a rough outline of what, some forty years later, emerged as the New Deal.