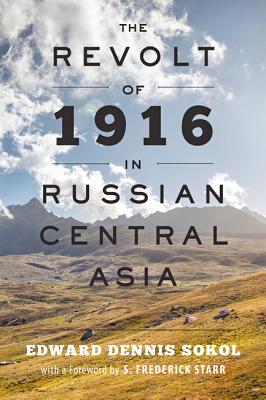 The definitive study of a nearly forgotten genocide, reissued with a new foreword.

During the summer of 1916, approximately 270,000 Central Asians--Kazakhs, Kyrgyz, Tajiks, Turkmen, and Uzbeks--perished at the hands of the Russian army in a revolt that began with resistance to the Tsar's World War I draft. In addition to those killed outright, tens of thousands of men, women, and children died while trying to escape over treacherous mountain passes into China. Experts calculate that the Kyrgyz, who suffered most heavily, lost 40% of their total population.

This horrific incident was nearly lost to history. During the Soviet era, the massacre of 1916 became a taboo subject, hidden in sealed archives and banished from history books. Edward Dennis Sokol's pioneering Revolt of 1916 in Russian Central Asia, published in 1954 and reissued now for the first time in decades, was for generations the only scholarly study of the massacre in any language. Drawing on early Soviet periodicals, including Krasnyi Arkhiv (The Red Archive), Sokol's wide-ranging and exhaustively researched work explores the Tsarist policies that led to Russian encroachment against the land and rights of the indigenous Central Asian people. It describes the corruption that permeated Russian colonial rule and argues that the uprising was no mere draft riot, but a revolt against Tsarist colonialism in all its dimensions: economic, political, religious, and national. Sokol's masterpiece also traces the chain reaction between the uprising, the collapse of Tsarism, and the Bolshevik Revolution.

A classic study of a vanished world, Sokol's work takes on contemporary resonance in light of Vladimir Putin's heavy-handed efforts to persuade Kyrgyzstan to join his new economic union. Sokol explains how an earlier Russian conquest ended in disaster and implies that a modern conquest might have the same effect. Essential reading for historians, political scientists, and policymakers, this reissued edition is being published to coincide with the centennial observation of the genocide.

Edward Dennis Sokol (1923-2014) earned his BA from Johns Hopkins University in 1947 and his PhD in 1952. S. Frederick Starr is the founding chairman of the Central AsiaCaucasus Institute and Silk Road Studies Program. He is the author of Lost Enlightenment: Central Asia's Golden Age from the Arab Conquest to Tamerlane.