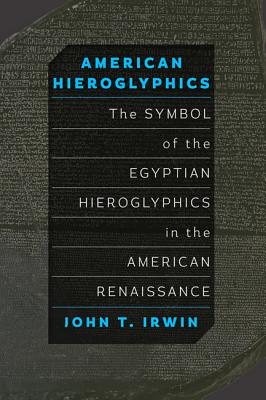 A sophisticated examination of the American Symbolists, back in print for the first time in more than a decade.

The discovery of the Rosetta Stone and the subsequent decipherment of Egyptian hieroglyphics captured the imaginations of nineteenth-century American writers and provided a focal point for their speculations on the relationships between sign, symbol, language, and meaning. Through fresh readings of classic works by Emerson, Thoreau, Whitman, Poe, Hawthorne, and Melville, John T. Irwin's American Hieroglyphics examines the symbolic mode associated with the pictographs.

Irwin demonstrates how American Symbolist literature of the period was motivated by what he calls "hieroglyphic doubling," the use of pictographic expression as a medium of both expression and interpretation. Along the way, he touches upon a wide range of topics that fascinated people of the day, including the journey to the source of the Nile and ideas about the origin of language.

John T. Irwin is the Decker Professor in the Humanities emeritus at Johns Hopkins University. His books include F. Scott Fitzgerald's Fiction: "An Almost Theatrical Innocence"; Hart Crane's Poetry: "Appollinaire lived in Paris, I live in Cleveland, Ohio"; The Mystery to a Solution: Poe, Borges, and the Analytic Detective Story; and Unless the Threat of Death Is Behind Them: Hard-Boiled Fiction and Film Noir.