Nature and Culture: Ethical Thought in the French Enlightenment (Paperback) 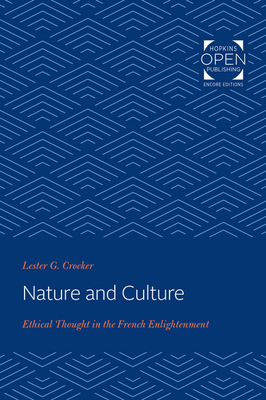 Nature and Culture: Ethical Thought in the French Enlightenment (Paperback)

Originally published in 1963. Perhaps the most generative ethical question of eighteenth-century France was how to live a virtuous and happy life at the same time. During the Age of Enlightenment, Christianity fell out of vogue as the dominant and authoritative moral code. In place of Christianity's emphasis on sin and redemption in light of a supposed afterlife, present happiness became recognized as an appropriate end goal among French Enlightenment thinkers. French intellectuals struggled to find equilibrium between nature (a person's individual goals and needs) and culture (the political, economic, and social organization of humans for a collective good). Enlightenment discourse generated a unique cultural moment in which thinkers addressed the problems of humans' moral coexistence through the dichotomy of nature and culture. Lester Crocker addresses these questions in an overview of ethical thought in eighteenth-century France.

Lester G. Crocker (1912-2002) was a professor of History at Case Western Reserve University and the University of Virginia. He specialized in French literature and Enlightenment philosophy. He is also the author of An Age of Crisis: Man and World in Eighteenth Century French Thought, Rousseau's Social Contract: An Interpretive Essay, and Diderot's Chaotic Order: Approach and Synthesis.