Republics of Myth: National Narratives and the Us-Iran Conflict (Hardcover) 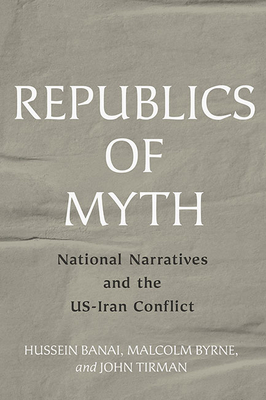 Republics of Myth: National Narratives and the Us-Iran Conflict (Hardcover)

Why does the rift between the US and Iran persist?

Iran and the United States have been at odds for forty years, locked in a cold war that has run the gamut from harsh rhetoric to hostage-taking, from crippling sanctions to targeted killings. In Republics of Myth, Hussein Banai, Malcolm Byrne, and John Tirman argue that a major contributing factor to this tenacious enmity is how each nation views itself. The two nations have differing interests and grievances about each other, but their often-deadly confrontation derives from the very different national narratives that shape their politics, actions, and vision of their own destiny in the world.

The dominant American narrative is the myth of the frontier--that the US can tame it, tame its inhabitants, and nurture democracy as well. Iran, conversely, can claim two dominant myths: the first, an unbroken (but not for lack of trying) lineage back to Cyrus the Great, and the second, the betrayal of Imam Hussein, the Prophet's grandson. Both Iranian myths feature a detestable outsider as an enemy of the Iranian state and source of the nation's ills and misfortune. The two countries have clashed so severely in part, the authors argue, because their national narratives constantly drive them to do so. Drawing on newly declassified documents and discussions with policymakers, the authors analyze an array of missed opportunities over several decades to improve the US-Iran relationship.

From the coup d' tat that overthrew Iran's legitimate premier Mohammad Mosaddeq to the hostage crisis, the Iran-Iraq War, the 1996 Khobar Towers bombing, post-9/11 antagonisms, and other points of conflict, each episode illustrates anew the weight of historical narratives on present circumstances. Finally, Barack Obama's diplomacy and Donald Trump's determination to undo the 2015 nuclear accord are explored--both examples of the enduring power of America's frontier narrative. Introducing new insights and knowledge in a highly readable narrative, Republics of Myth makes a major contribution to understanding this vital conflict.

Hussein Banai is an assistant professor of international studies at Indiana University. Malcolm Byrne is the deputy director and research director of the National Security Archive at George Washington University. John Tirman is the executive director and principal research scientist at the MIT Center for International Studies. The three are the coauthors of Becoming Enemies: U.S.-Iran Relations and the Iran-Iraq War, 1979-1988.