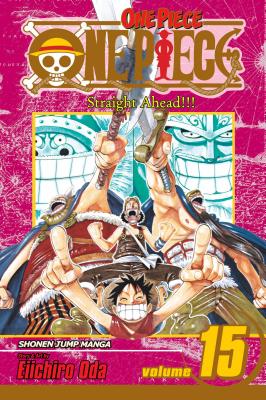 This is book number 15 in the One Piece series.

Nami's sick! Now the Merry Go is without her navigator! Luffy and crew have but one choice--find land and hopefully a doctor. They miraculously stumble upon Drum Island, where it is eternally winter, but upon arriving they find out the island has only one medical professional--and she's a witch! With Nami's life on the line, Luffy sets out through the snow-laden fields to find this doctor, witch or not!
Eiichiro Oda began his manga career at the age of 17, when his one-shot cowboy manga Wanted! won second place in the coveted Tezuka manga awards. Oda went on to work as an assistant to some of the biggest manga artists in the industry, including Nobuhiro Watsuki, before winning the Hop Step Award for new artists. His pirate adventure One Piece, which debuted in Weekly Shonen Jump magazine in 1997, quickly became one of the most popular manga in Japan.