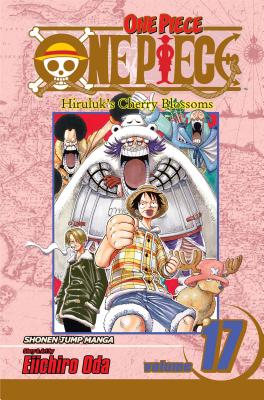 This is book number 17 in the One Piece series.

It's the final showdown with the metallic King Wapol! He wants his castle back and he's not taking "no" for an answer. Well, Luffy, Sanji and their newfound friend Tony Tony Chopper aren't giving up so easily! But our heroes have their hands full--especially with Wapol's ability to modify his body depending on what he eats! Meanwhile, down the mountain in Big Horn village the people are devastated as their beloved leader lies in the snow, badly injured. But all is not lost when Wapol's deadly 20 Doctors make an unbelievable announcement!
Eiichiro Oda began his manga career at the age of 17, when his one-shot cowboy manga Wanted! won second place in the coveted Tezuka manga awards. Oda went on to work as an assistant to some of the biggest manga artists in the industry, including Nobuhiro Watsuki, before winning the Hop Step Award for new artists. His pirate adventure One Piece, which debuted in Weekly Shonen Jump magazine in 1997, quickly became one of the most popular manga in Japan.