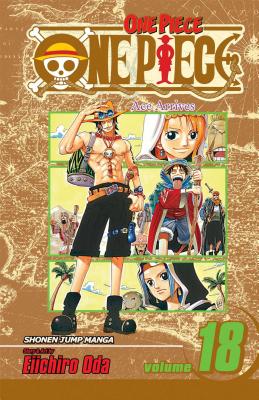 This is book number 18 in the One Piece series.

The Straw Hats at long last reach Alabasta! But their stay is cut short when Luffy attracts too much attention from the Navy. They're not the only ones interested in Luffy--someone from his past has been waiting for him too! Meanwhile, the Baroque Works' agents are summoned together when their leader, the dastardly Mr. Zero, aka Sir Crocodile, learns that Luffy is still alive and orders his immediate extermination!
Eiichiro Oda began his manga career at the age of 17, when his one-shot cowboy manga Wanted! won second place in the coveted Tezuka manga awards. Oda went on to work as an assistant to some of the biggest manga artists in the industry, including Nobuhiro Watsuki, before winning the Hop Step Award for new artists. His pirate adventure One Piece, which debuted in Weekly Shonen Jump magazine in 1997, quickly became one of the most popular manga in Japan.