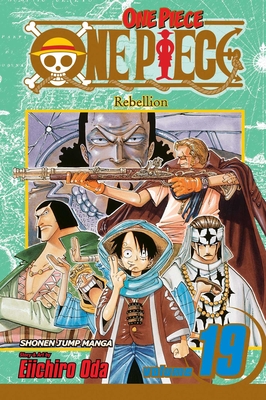 This is book number 19 in the One Piece series.

Luffy and pals are headed for the fabled Rainbase, the town of dreams. There they accidentally attract the unwanted attention of the Baroque Works security as well as their old "pal" Captain Smoker! While beating a hasty retreat from both, Ms. All Sunday invites the crew to the casino's VIP room, which turns out to be a trap. To make matters worse, Vivi gets separated from the others and is pursued by the Baroque Works! Will she be able to shake her pursuers and spring her friends?!
Eiichiro Oda began his manga career at the age of 17, when his one-shot cowboy manga Wanted! won second place in the coveted Tezuka manga awards. Oda went on to work as an assistant to some of the biggest manga artists in the industry, including Nobuhiro Watsuki, before winning the Hop Step Award for new artists. His pirate adventure One Piece, which debuted in Weekly Shonen Jump magazine in 1997, quickly became one of the most popular manga in Japan.