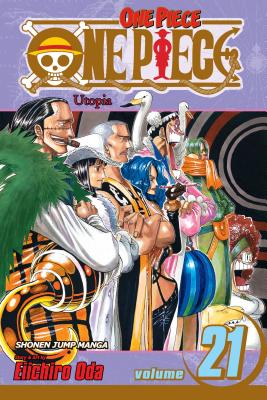 This is book number 21 in the One Piece series.

The Straw Hats are keeping the Officer Agents preoccupied while Vivi makes her way to the palace. Sanji's got his hands full with Mr. 2 Bon Clay while Zolo battles mano a mano with Mr. 1--or rather sword to sword body in this case! That leaves Nami on her own with Ms. Doublefinger--a prickly predicament with only her wits and Usopp's special weapon to depend on. Can the Straw Hats prevail against the best of the Baroque Works?!
Eiichiro Oda began his manga career at the age of 17, when his one-shot cowboy manga Wanted! won second place in the coveted Tezuka manga awards. Oda went on to work as an assistant to some of the biggest manga artists in the industry, including Nobuhiro Watsuki, before winning the Hop Step Award for new artists. His pirate adventure One Piece, which debuted in Weekly Shonen Jump magazine in 1997, quickly became one of the most popular manga in Japan.